A toggle between Suomi NPP VIIRS Day/Night Band (0.7 µm) and Shortwave Infrared (3.74 µm) images at 1454 UTC or 1:54 am AEDT (below) displayed the nighttime glow and hot thermal signatures of large bushfires south and southeast of Canberra.

Himawari-8 Shortwave Infrared (3.9 µm) and “Clean” Infrared Window (10.4 µm) images (below) showed the development of 2 pyrocumulonimbus (pyroCb) clouds — the first over southern New South Wales west of Cooma (station identifier YCOM), and the second to the southwest of YCOM (near the border between Victoria and New South Wales). The second pyroCb eventually exhibited cloud-top infrared brightness temperature (IRBT) values of -70ºC and colder (purple pixels). To be classified as a pyroCb, a deep convective cloud must be generated by a large/hot fire, and eventually exhibit cloud-top 10.4 µm IRBTs of -40ºC and colder (thus assuring the heterogeneous nucleation of all supercooled water droplets to ice crystals within the thunderstorm anvil).

An aircraft flying very near or through one of these pyroCb clouds experienced severe turbulence:

On 4th Jan a @Qantas flight between Melbourne – Canberra flew through a PyroCB: A large, energetic, thunderstorm triggered by the #AustralianFires, causing severe turbulence: https://t.co/VvrsStWXK9

Here’s how it looked from space. Storm encounter was at approx. 07:47 UTC. pic.twitter.com/shuDaCk1ti

Farther to the north, another pyroCb developed near Nowra, New South Wales (YSNW) — which briefly exhibited a -40ºC cloud-top IRBT at 0319 UTC, but then re-intensified around 08 UTC (below).

In a sequence of VIIRS True Color Red-Green-Blue (RGB) and Infrared Window (11.45 um) images from NOAA-20 and Suomi NPP as viewed using RealEarth (below), the Nowra pyroCb was less ambiguous during the 03-04 UTC time period — and the aforementioned pair of pyroCbs straddling the border between Victoria and New South Wales were also evident.

On 06 January, GOES-16 (GOES-East) Natural Color RGB images (above) displayed the hazy signature of high-altitude smoke (originating from previous episodes of Australian fires) over parts of Chile and Argentina — and the corresponding GOES-16 Smoke Detection derived product flagged much of this feature as “High Confidence” smoke (red).

In addition, GOES-17 (GOES-West) True Color RGB images created using Geo2Grid (below) showed a dense pall of smoke over the South Pacific Ocean (northeast of New Zealand). This was smoke from the 04 January outbreak of fires. 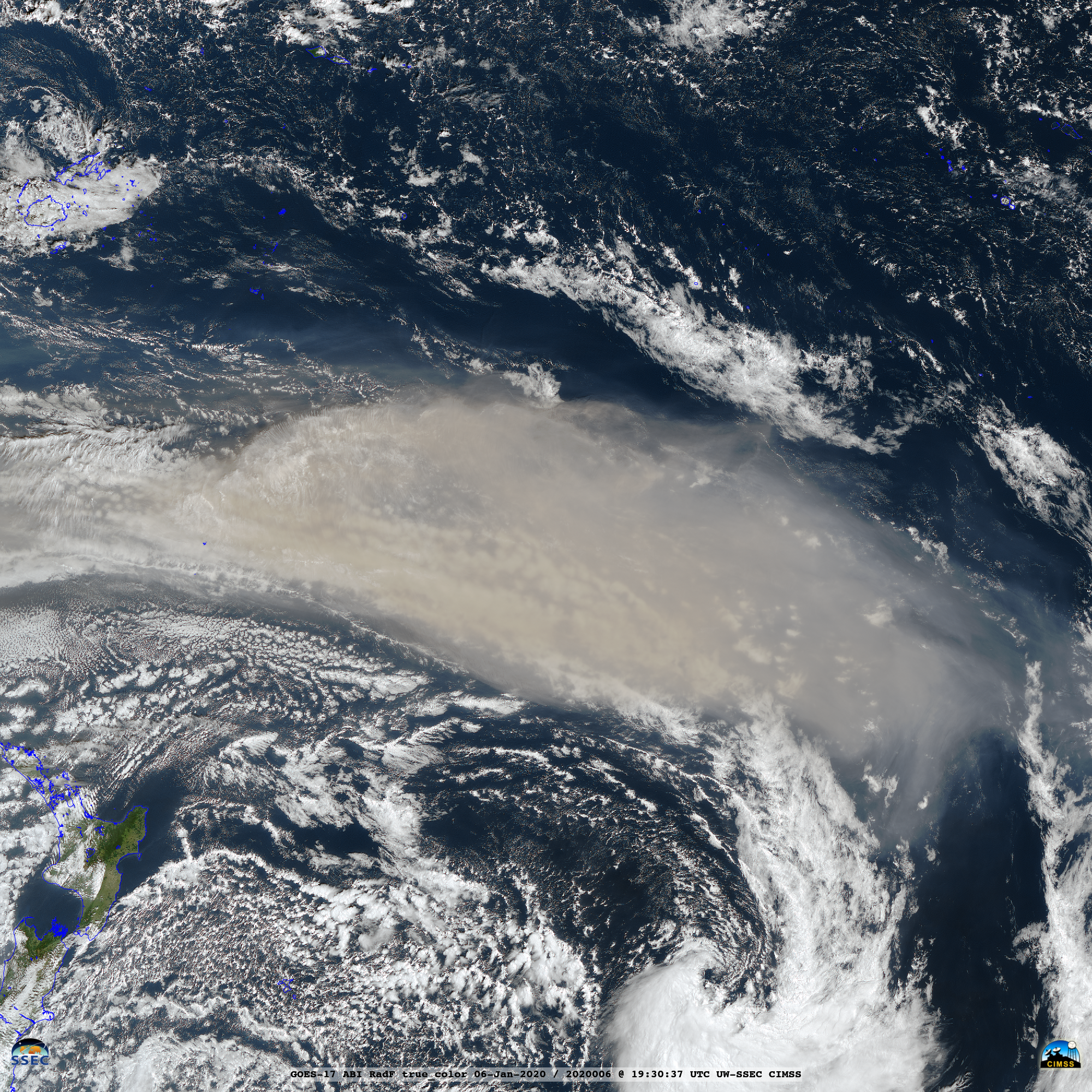 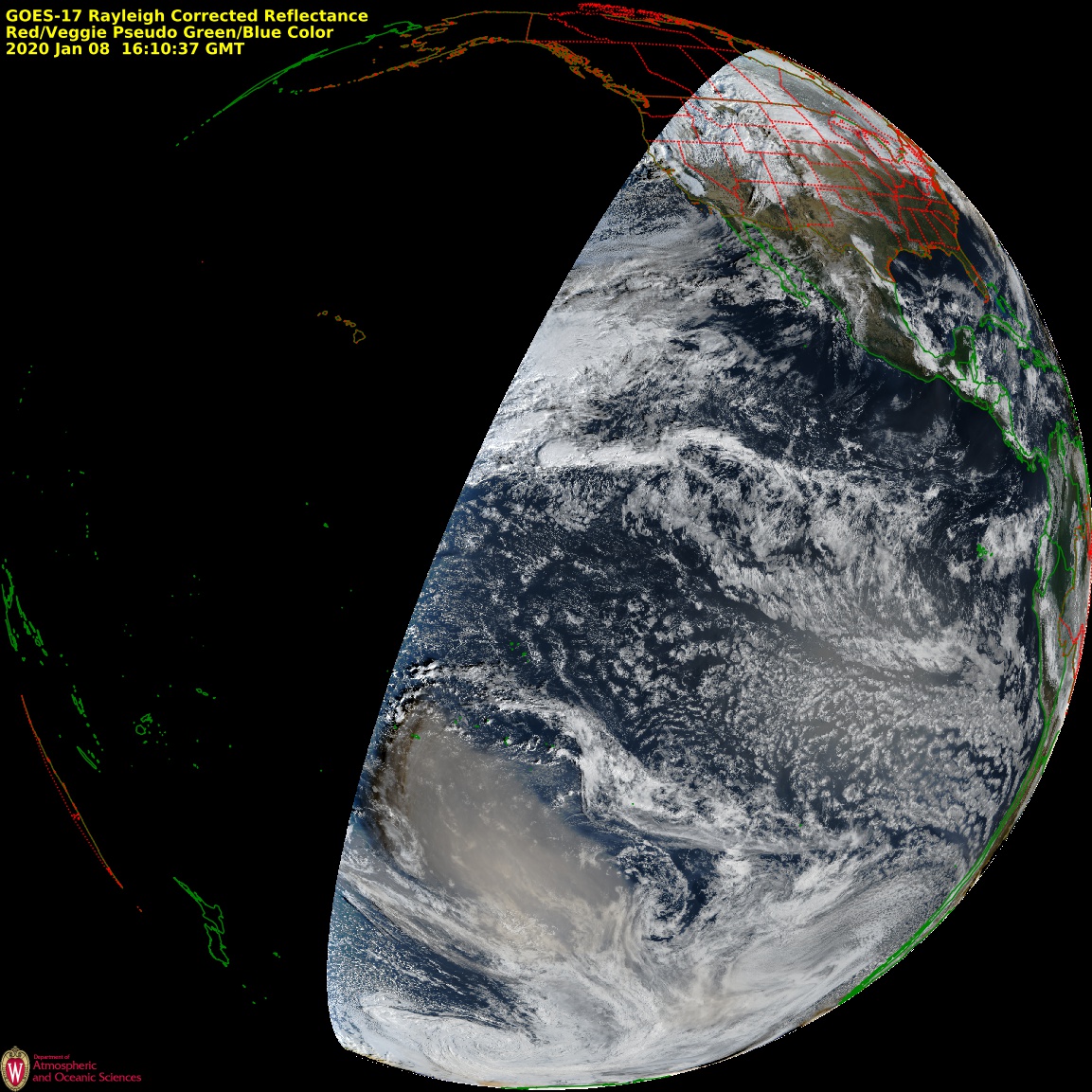 Full Disk GOES-17 True Color RGB images from the AOS site (above) showed the slow eastward transport of a dense pall of smoke (hazy shades of tan to light brown) across the South Pacific Ocean during the 05-08 January period.

JMA Himawari-8 Shortwave Infrared (3.9 µm) and Longwave Infrared Window (10.4 µm) images (above) showed a large bushfire (dark black to red pixels in the 3.9 µm imagery) in far southeastern Victoria, Australia — which quickly burned its way to the coast and produced 3 distinct pulses of pyrocumulonimbus (pyroCb) clouds on 29 December 2019. To be classified as a pyroCb, the deep convective cloud must be generated by a large/hot fire (in this case, the Cann River fire complex), and eventually exhibit cloud-top 10.4 µm infrared brightness temperatures of -40ºC and colder (assuring the heterogeneous nucleation of all supercooled water droplets to ice crystals).

The coldest cloud-top 10.4 µm infrared brightness temperature was -62.6ºC (darker green pixels) at 1650 UTC. According to rawinsonde data from Melbourne (below), this corresponded to an altitude near 13 km.

Plots of rawinsonde data from Melbourne, Australia [click to enlarge]

The long/narrow thermal anomaly of the hot bushfire — which burned southwestward all the way to the coast — was outlined in dark black pixels on VIIRS Infrared Window (11.45 µm) images from NOAA-20 and Suomi NPP, as viewed using RealEarth (below).

A Himawari-8 Target Sector was positioned over southeastern Australia beginning at 2312 UTC on 29 December, providing images at 2.5-minute intervals — a comparison of Shortwave Infrared and Longwave Infrared Window imagery (above) revealed the formation of several additional pyroCb clouds as southeastern Victoria bushfires continued to grow in number and size. During the daytime, pyroCb cloud tops will appear warmer (darker gray) than those of conventional thunderstorms in the 3.9 µm imagery, due to enhanced reflection of solar radiation off the smaller ice crystals found in the pyroCb anvil. Development of the multiple deep convective pyroCb clouds on this day may have been aided by forcing for ascent provided by an approaching cold front and mid-tropospheric trough, along with favorable upper-tropospheric jet streak dynamics.

Plots of rawinsonde data from Melbourne, Australia at 00 UTC (yellow) and 12 UTC (cyan) [click to enlarge]

In a toggle between VIIRS Infrared Window (11.45 µm) images from NOAA-20 and Suomi NPP is shown (below), a large pyroCb cloud was seen moving eastward away from the bushfires.

Suomi NPP VIIRS Day/Night Band, Shortwave Infrared, Near-Infrared & Active Fire Product images (above) showed nighttime signatures of the widespread bushfires across Victoria and New South Wales at 1455 UTC on 31 December (or 1:55 am local time on 01 January). In the town of Mallacoota, about 4000 people were forced to evacuate their homes and take shelter along the coast (media report). The surface air temperature at Mallacoota Airport briefly increased to 49ºC (120ºF) at 8:00 am local time as the fires approached (below).


A sequence of daily Aqua MODIS True Color RGB images with an overlay of VIIRS Fire Radiative Power showed the fires and smoke during the 29-31 December period (below).

VIIRS True Color Red-Green-Blue (RGB) and Infrared Window (11.45 µm) images from Suomi NPP and NOAA-20 as viewed using RealEarth are shown below. Cloud-top 11.45 µm brightness temperatures of the northern pyroCb thunderstorm were in the -70 to -75ºC range on the later 0407 UTC Suomi NPP image.

The coldest Himawari-8 10.4 µm brightness temperature (BT) associated with the southernmost thunderstorm was -67.0ºC at 0520 UTC (with the northern pyroCb thunderstorm, closer to the fire complex, reaching -66.9ºC at 0500 UTC). According to 00 UTC rawinsonde data from nearby Williamtown (below), those BTs were 2-3ºC colder than the coded tropopause temp of -64.5ºC at 12.6 km. The VIIRS 11.45 µm BTs were nearly 10ºC colder than the tropopause, suggesting significant penetration of overshooting tops into the lower stratosphere.

GOES-16 (GOES-East) “Red” Visible (0.64 µm), Shortwave Infrared (3.9 µm) and “Clean” Infrared Window (10.35 µm) images (above) showed the formation of a pyroCb cloud over far southeastern Bolivia on 18 August 2019. The small anvil cloud briefly surpassed the -40ºC pyroCb threshold from 1800-1820 UTC, attaining a minimum cloud-top infrared brightness temperature of -45.2ºC along the Bolivia/Paraguay border at 1800 UTC. This pyroCb formed over the hottest southern portion of an elongated fire line, as shown in the Shortwave Infrared imagery.

A 1.5-day animation of GOES-16 Shortwave Infrared images (from 12 UTC on 17 August to 2350 UTC on 18 August) revealed the rapid southeastward run of the fire to the Bolivia/Paraguay border on 17 August, followed by the eastward expansion of the fire line on 18 August (below).

A toggle between Suomi NPP VIIRS True Color Red-Green-Blue (RGB) and Infrared Window (11.45 µm) images as viewed using RealEarth (below) showed the large and dense smoke plume streaming southeastward, with the small pyroCb along the Bolivia/Paraguay border at 1745 UTC — the brighter white tops of the pyrocumulus and pyrocumulonimbus clouds reached higher altitudes than the tan-colored smoke plume. The coldest cloud-top infrared brightness temperature was about -55ºC (orange enhancement), which corresponded to an altitude around 9 km according to rawinsonde data from Corumbá, Bolivia.

Looking more closely at yesterday's smoke over South America, the aerosol index from #NOAA20 #OMPS was in double digits! Values on the right refer to the UTC of the measurements. pic.twitter.com/3XBqoEVs4M


Strong northerly to northwesterly surface winds were blowing across the region, in advance of an approaching cold front (surface analyses) — at Robore, Bolivia (located just north-northwest of the fires), winds were gusting to 25-28 knots during much of the day (below).

On 30 April, JMA Himawari-8 “Red” Visible (0.64 µm), Shortwave Infrared (3.9 µm) and “Clean” Infrared Window (10.4 µm) images (above) showed the formation of the first known pyroCb of the 2019 Northern Hemisphere wildfire season. The pyroCb developed within the warm sector of an approaching midlatitude cyclone (surface analyses) in the Russian Far East, between still-ice-covered Lake Bolon and the Amur River. The cloud-top infrared brightness temperature first reached the -40ºC “pyroCb threshold” at 0310 UTC; note that the pyroCb cloud top appears warmer (darker shades of gray) than those of surrounding thunderstorms in the Shortwave Infrared images — a characteristic of enhanced solar reflection off the smaller ice crystals that are found in pyroCb cirrus anvils.

In a sequence of three VIIRS True Color Red-Green-Blue (RGB) and Infrared Window (11.45 µm) images from NOAA-20 and Suomi NPP as viewed using RealEarth (above), the coldest cloud-top infrared brightness temperature of the pyroCb was -59ºC — which closely corresponded to the tropopause temperature on 00 UTC rawinsonde data from Habarovsk (below), located just southwest of the fire region.

Plot of 00 UTC rawinsonde data from Habarovsk [click to enlarge]