On 05 July there was possibility that a fire in southern British Columbia (located at 50º N, 123.5º W) produced a small pyroCb cloud; upon further analysis it was determined that this fire did indeed produce a pyroCb because the satellite-detected cloud-top IR brightness temperature reached the -40º C or colder threshold. GOES-15 3.9 µm shortwave IR images shown below detected the large “hot spot” signatures of these fires, as seen starting at 08:00 UTC on 05 July (click to play animation). The black to red pixels indicate very hot IR brightness temperatures exhibited by the fire source regions. Usually GOES visible imagery can be used to see the associated smoke plumes, but since the time of the pyroCb formation was during nighttime hours visible imagery was unavailable.

A side-by-side comparison of GOES-15 3.9 µm and 10.7 µm imagery (below; click to play animation) incorporates the 2 extra images per hour (at :11 and :41) of the “SUB-CONUS” sector, making it a bit easier to follow the initial formation and fast southeastward motion of the pyroCb cloud which originated from the southernmost of the 2 largest and hottest fires.

In a comparison of Suomi NPP VIIRS 3.74 µm shortwave IR, 0.7 µm Day/Night Band (DNB), and 11.45 µm IR channel images at 1017 UTC (below), the actively burning fires (yellow to red to black pixels on the shortwave IR image) also exhibited a bright glow on the DNB image; in addition, due to ample illumination from a Full Moon, a large smoke cloud could be seen spreading southwestward away from the southernmost large fire (demonstrating the “visible image at night” capability of the DNB). At the time of the VIIRS images the pyroCb cloud feature had drifted about 100 miles south-southeastward away from the fire source region and was located near the US/Canada border — yet still had a minimum IR brightness temperature of -54ºC (darker orange color enhancement). This example helps to highlight the advantage of using polar-orbiting satellite imagery to help locate and track pyroCb features: due to much higher spatial resolution (375-meter with VIIRS, vs. 4-km with GOES) a colder and more accurate cloud-top IR brightness temperature could be detected, and due to minimal parallax viewing error the cloud feature could be more precisely located (VIIRS vs GOES-15 IR comparison).

On 05 July OMPS Aerosol Index (AI) images were useful to see the transport of the smoke. The AI images (below; courtesy of Colin Seftor) confirmed that smoke from the British Columbia fires was being transported southeastward. 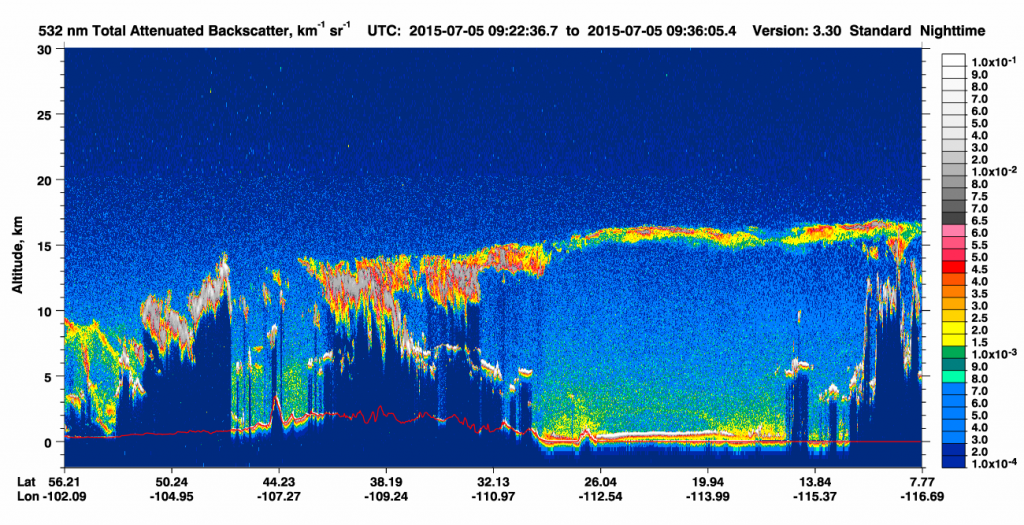 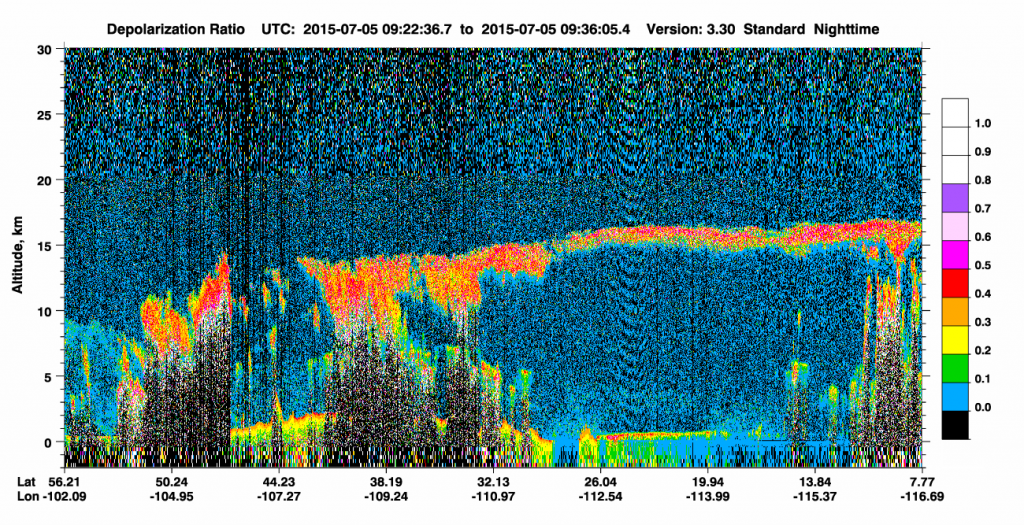 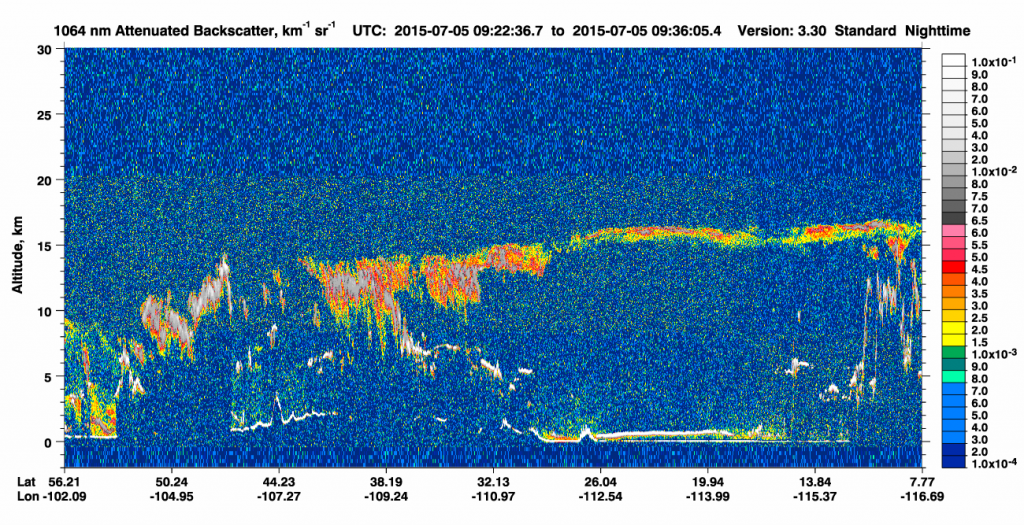 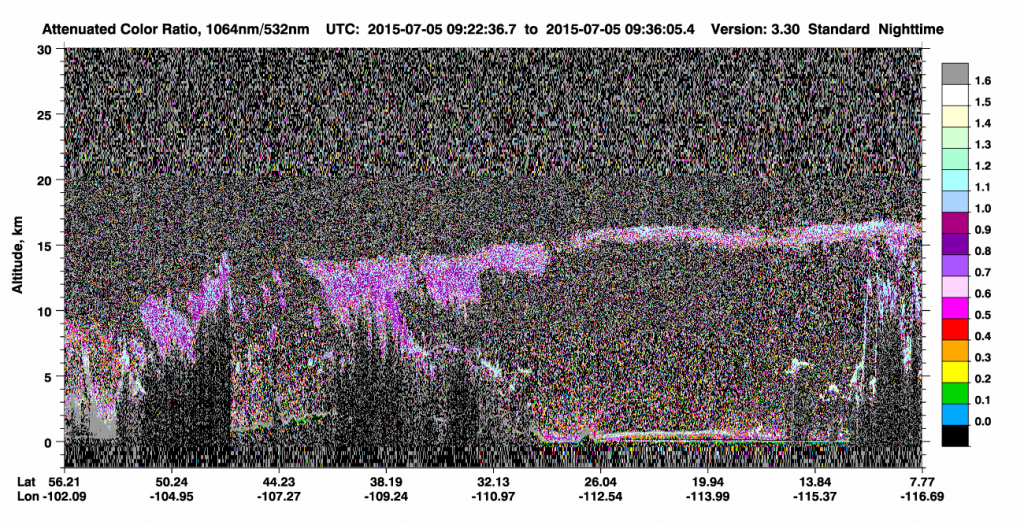 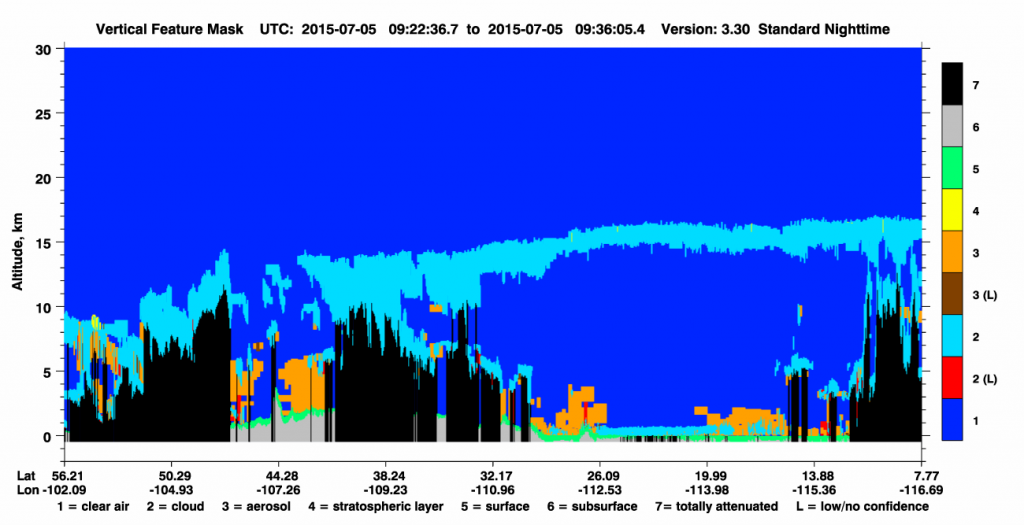