On 11 June 2015 there was pyroCb in Western Alberta (53.6 N 119.4 W) from a fire that started on 08 June. The start date of the fire was found from using the Canadian Wildland Fire Information System (link provided by Rene). The first image below shows active fires on 07 June. Notice that the area where the pyroCb was detected does not have an active fire on 07 June (area enclosed by red circle). By 08 June the same area (again enclosed by red circle) has an active fire greater than 1000 hectares. These images put the start date of the fire on 08 June. 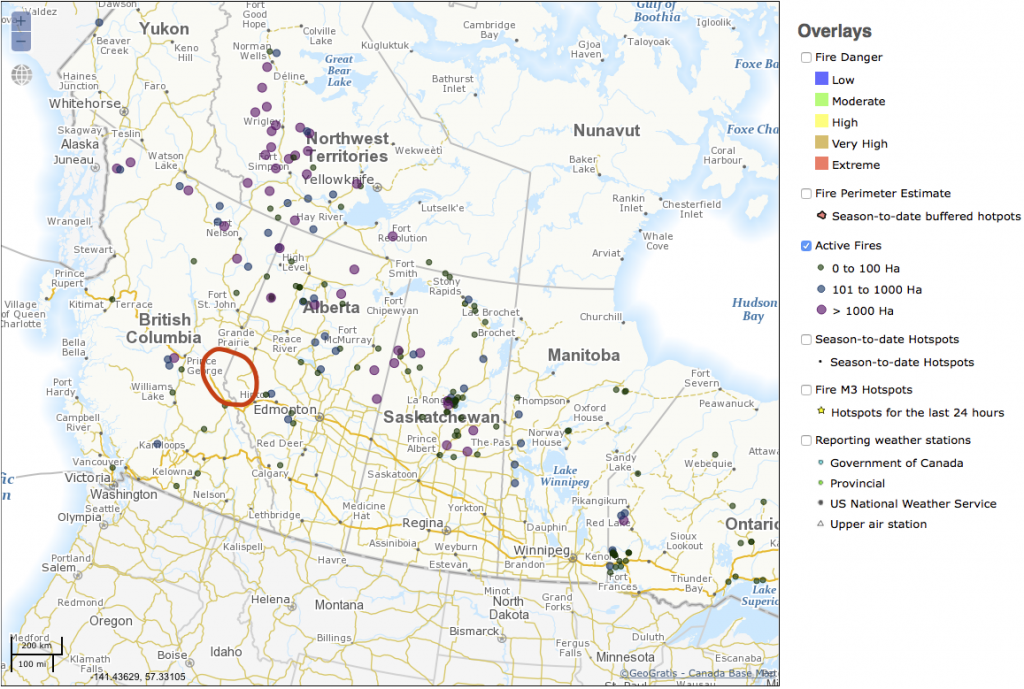 Active Fires in Canada on 07 June 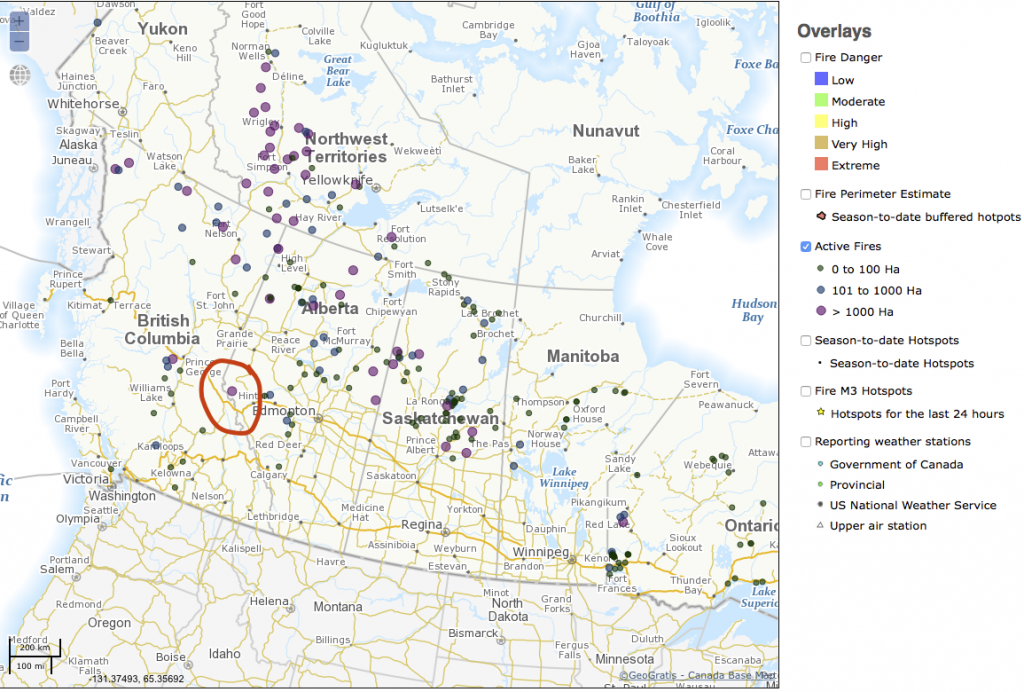 Active Fires in Canada on 08 June

Even though the fire started on 08 June it did not produce a pyroCb until 11 June around 23:00 UTC.GOES 15 detects the pyroCbs at visible (.63 μm) and IR (3.9 μm) channels shown below starting at 19:45 UTC 11 June (click in animation to play). In the IR image the red pixels indicate hot shortwave IR bright temperatures exhibited by the fire. 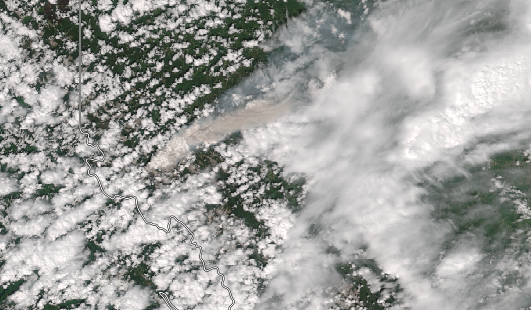 The image below shows the pyroCb that occurred in Grande Cache, AB around 22:40 Z (image courtesy by a colleague of Dov Bensimon). The image shows the depth of the pyroCb extending all the way up to the upper troposphere or possibly the lower stratosphere. 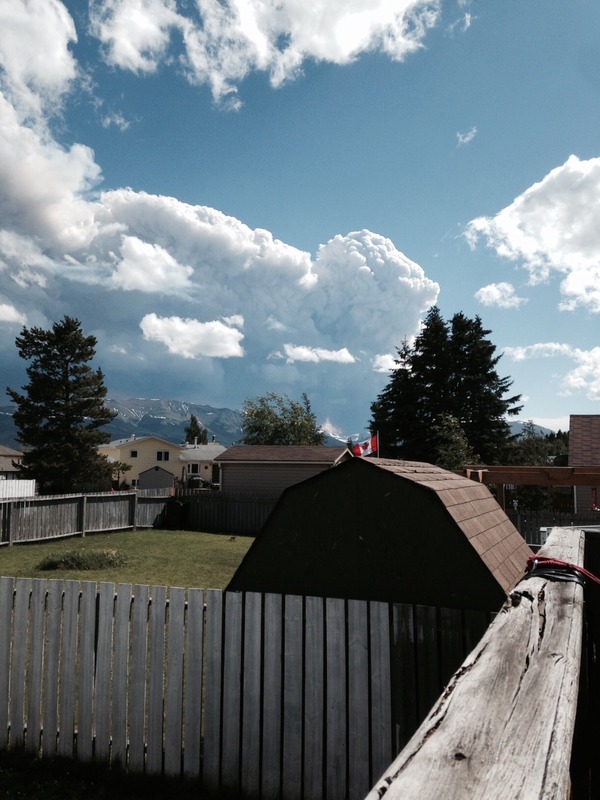 On 12 June OMPS AI Index images were used again to see the transport of the smoke. From the AI image (below; image courtesy of Colin Seftor), the smoke is moving northwest. On 12 June at 20:43 the max AI was at 58.44 N 119.29 W, which is just North of the original fire. The trajectory of this smoke can be seen using HYSPILT trajectory plot (courtesy of Mike Fromm). The plot at 10:00 UTC on 13 June shows a Northwestern trajectory that moves eastward then finally southwest. This conclusive with the AI image from the previous day that the smoke has moved northwest. 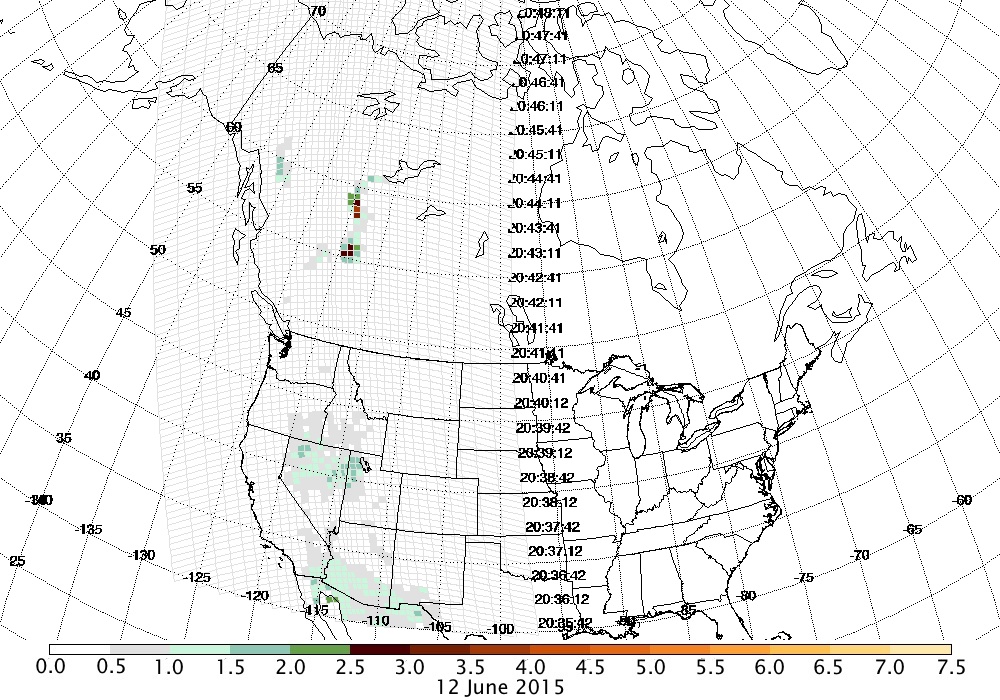 To further investigate the transport of smoke from this fire CALIPSO was used, courtesy of Mark Fromm. This is a LIDAR that captures the attenuated backscatter at 532 nm. The image below shows the LIDAR from 13 June 9:45 UTC to 13 June 10:07 UTC. The pyroCb smoke can be seen ~51 N and indicated on the image with a light grey/white color. In addition, the CALIPSO Aerosol Subtype shows that these aerosols are smoke. This is shown in the image by the black pixels. These pixels are around 51N were the pyroCb smoke is suspected to be.

Another look at CALIPSO LIDAR on 12 June produces additional information about the smoke transport. The first image below is the 532 nm Total Attenuated Backscatter plot on 12 June from 20:23 UTC to 20:37 UTC. The smoke from this fire is shown around 53 N indicated by a light grey/white color, continuing southeastward (toward the left on the plot). It is apparent that the source of the fire is around 53 N due to the smoke increasing in altitude as the LIDAR moves further southeast.  The next image is the Depolarization plot in which the smoke indicated by a red/pink color. The third image is 1064 nm Total Attenuated Backscatter plot, the smoke on this plot is indicated by a light grey color. The fourth image is the Attenuated Ratio plot between 1064 nm and 532 nm. The smoke is indicated by teal and purple pixels in this plot. The fifth image is the Vertical Feature Mask plot. This plot shows the different features that are in the atmosphere, in this plot the smoke is considered a cloud and indicated by a light blue color. The last image shows the subtype of the aerosols that have been detected by the LIDAR. This shows that the aerosols that the LIDAR have detected are smoke (indicated by black pixels) around 54 N. 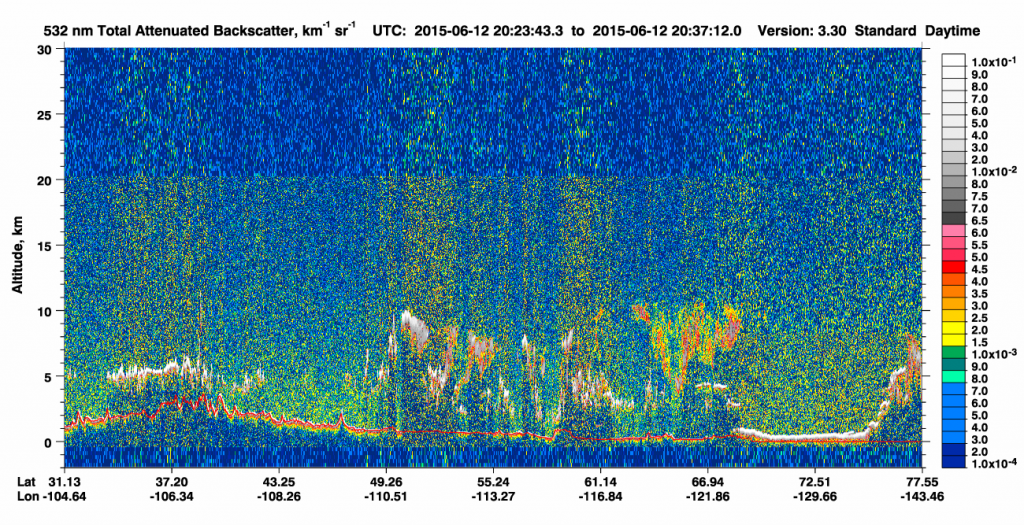 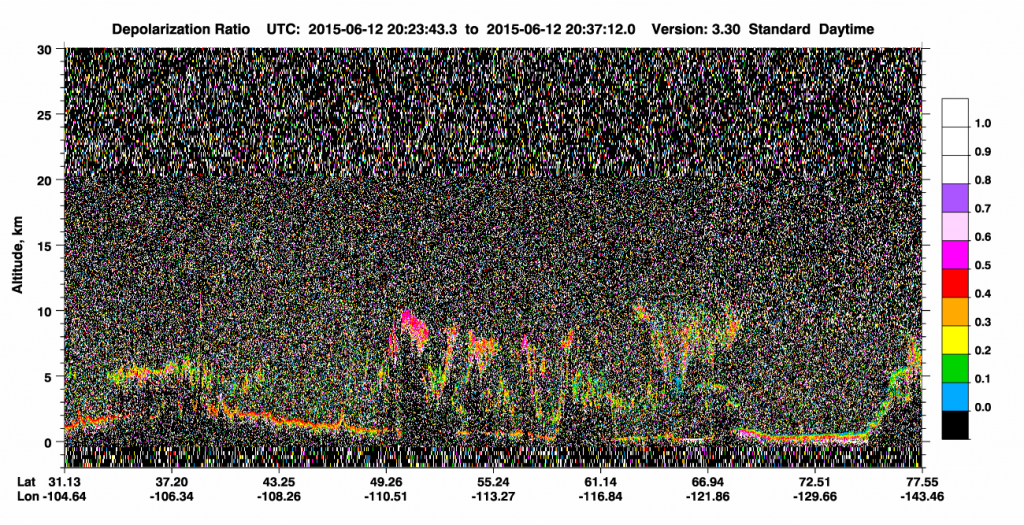 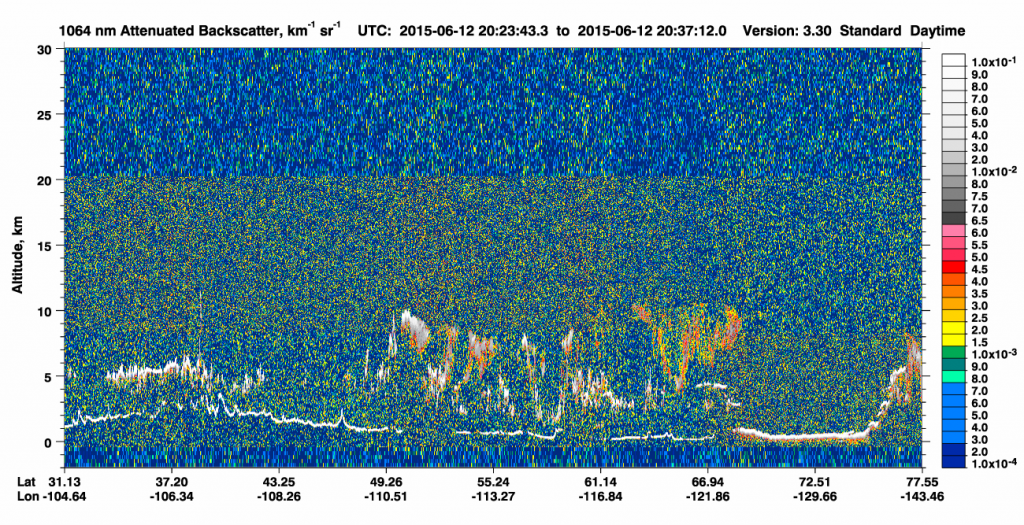 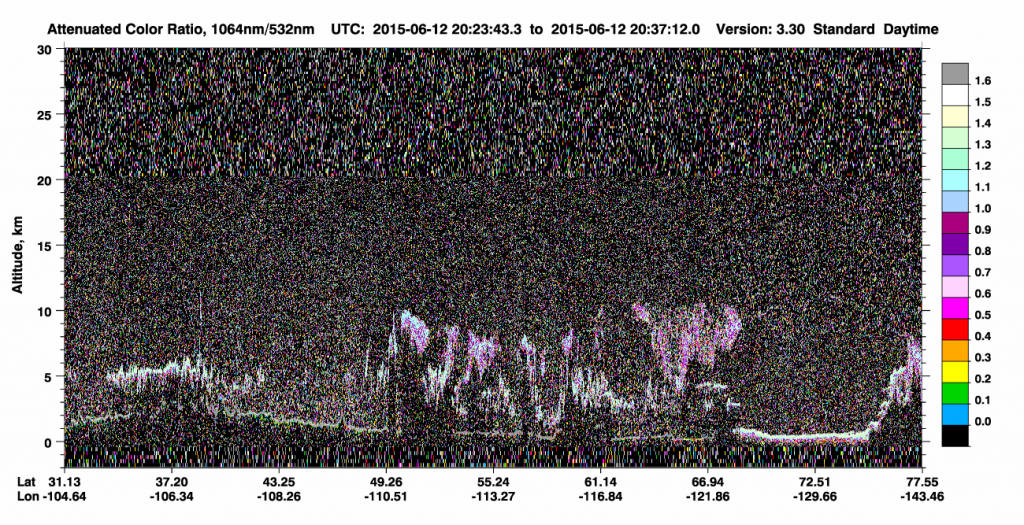 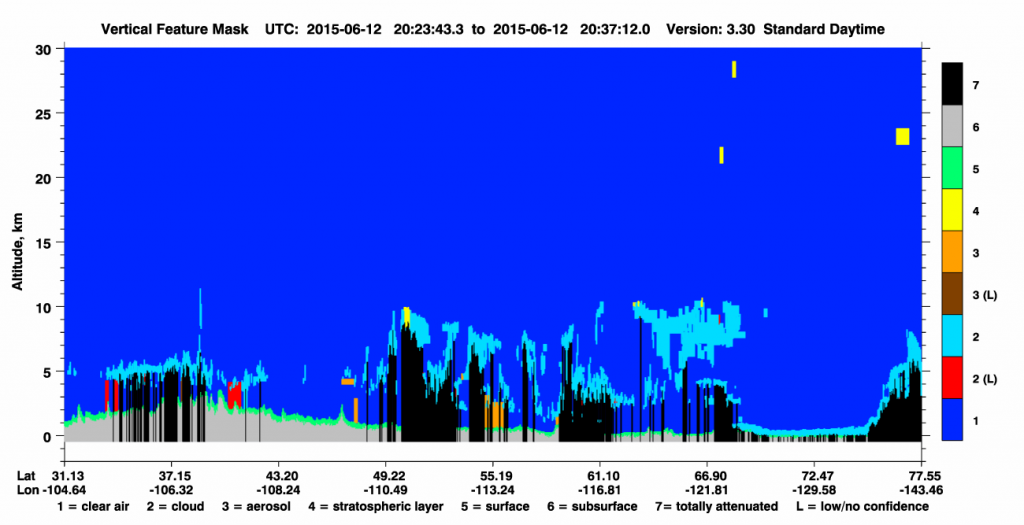