On 07 June 2014, McIDAS images of 1-km resolution GOES-15 0.63 µm visible channel and 3.9 µm shortwave IR channel images (above; click image to play animation) showed that the Two Bulls Fire just west of Bend, Oregon (station identifier KBDN) began to burn an area large enough to be detected by satellite around 20:00 UTC (1:00 PM local time), when a shortwave IR brightness temperature of 314.9 K was seen. Within 15 short minutes, the fire “hot spot” exhibited a shortwave IR brightness temperature of 339.6 K — the saturation temperature for the GOES-15 3.9 µm detectors — which continued for another 5.5 hours until 01:41 UTC on 08 June.

The corresponding 4-km resolution GOES-15 10.7 µm longwave IR channel images (below; click image to play animation) offered a hint that there may have been a brief pyrocumulonimbus (pyroCb) cloud at 00:30 UTC on 08 June, when a single pixel exhibited an IR brightness temperature value of -30º C (dark blue color enhancement). However, the GOES-15 satellite was in Full Disk scan mode during the time of formation of this potential pyroCb cloud, so images were only available every 30 minutes during this critical period.

Luckily, an overpass of the NOAA-16 polar-orbiting (or POES) satellite offered an excellent 1-km resolution view with the AVHRR 12.0 µm IR channel — a minimum IR brightness temperature of -49.0º C (yellow color enhancement) was detected at 00:32 UTC (below). Other POES AVHRR images can be seen here (courtesy of Rene Servranckx). 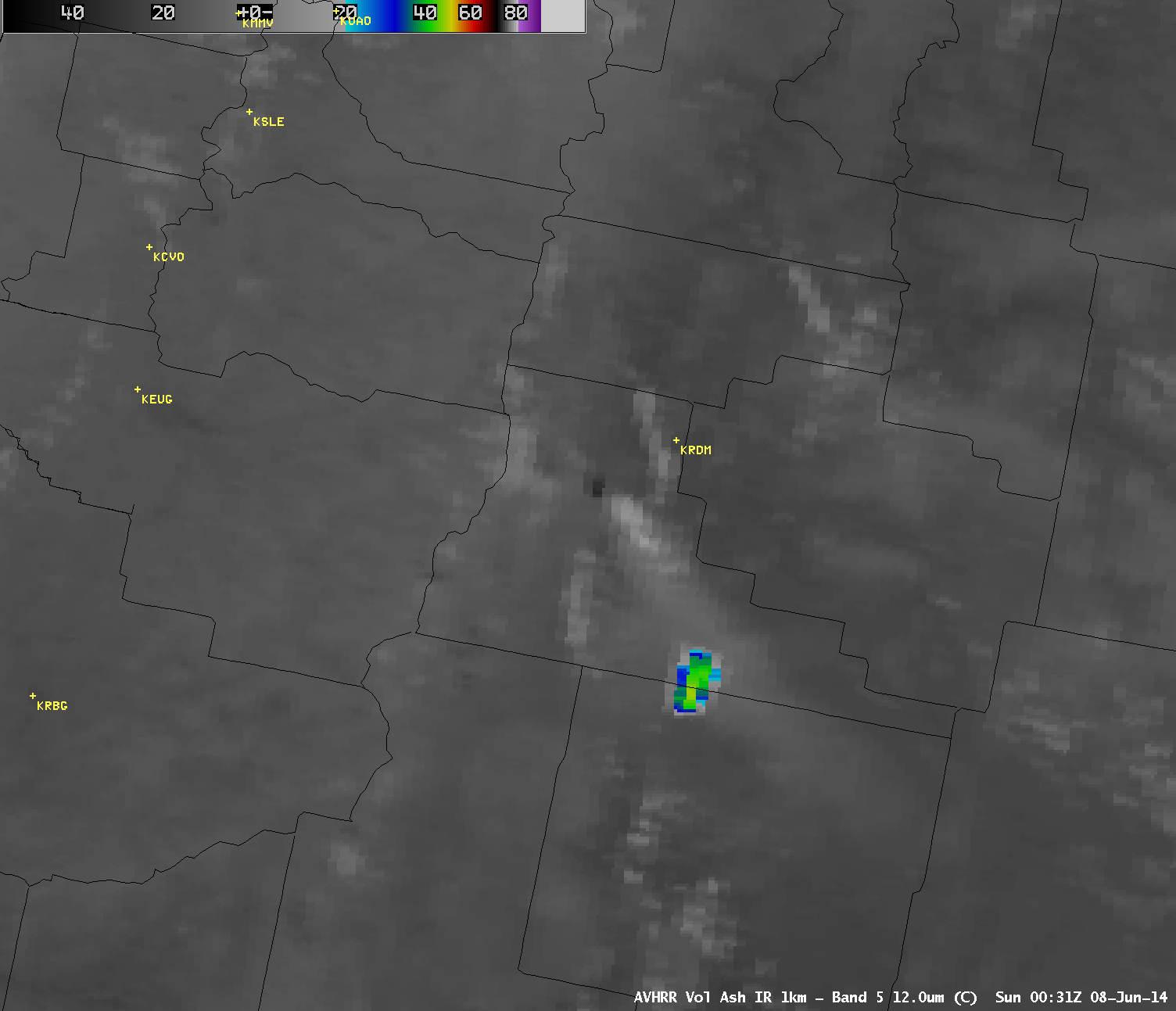 The Two Bulls Fire continued to burn into the following night, and a comparison of 375-meter resolution Suomi NPP VIIRS 3.74 µm shortwave IR and 750-meter resolution VIIRS 0.7 µm Day/Night Band images at 09:28 UTC (2:28 AM local time) showed a distinct fire “hot spot” on the shortwave IR, with the DNB image revealing the bright glow of the large fire just west of the glow of the city lights of Bend, Oregon (below). The Bend Municipal Airport is located well to the northeast of the city of Bend, explaining the offset of the city lights and the airport observation.

A comparison of the 375-meter resolution Suomi NPP VIIRS 3.74 µm with a 4-km resolution GOES-15 3.9 µm shortwave IR images around 09:30 UTC (below) demonstrated the clear advantage of improved spatial resolution for the detection of fire hot spot: VIIRS gave a maximum shortwave IR brightness temperature of 52.5º C, compared to only 14.5º C on the GOES-15 image.

On the following morning of 08 June, GOES-15 0.63 µm visible channel images (below; click image to play animation) showed that large amounts of smoke had been transported southward over northern California, and especially southeastward over Nevada. Later in the day on 08 June, pilot reports over northern California indicated that the top of the smoke layer was at an altitude of 11,000 feet.