Note: even though this large-scale smoke event was not pyroCb-related, we feel that it is important enough to document in terms of the long-range transport of biomass burning smoke and the potential implications on weather and climate far from the fire source regions.

Himawari-8 shows the smoke over the northeastern part of Asia. The animation above (from 22:00 UTC on 18 July to 06:00 UTC on 19 July) shows smoke moving off the eastern side of Asia, the smoke is indicated as a hazy white color. Furthermore, closely looking at the animation smoke plumes can be seen from the multiple wildfires. Also, the smoke does not seem to be moving very quickly and its shape possible indicating that it is following the path of a jet stream.

OMPS AI Index image on 19 July (courtesy of Colin Seftor) shows the transport of the smoke from these wildfires. The max AI was 5.9 at 55.5 N 126.9 E, the max value is northeast of the area where most of the wildfires are concentrated. 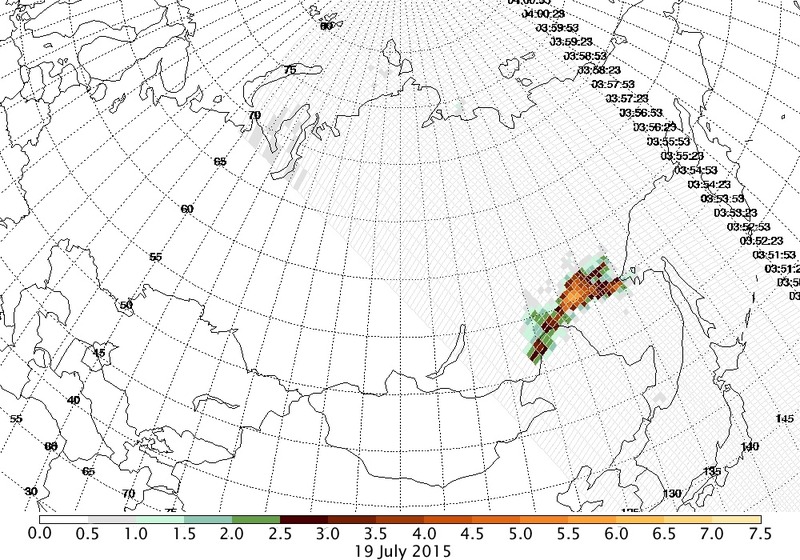 Furthermore, Suomi NPP VIIRS true-color imagery shows the progression of the smoke. The animation starts on 10 July where there appears to be little smoke. By 19 July most of the area is covered in hazy smoke. Also, looking closely at the animation smoke plumes can be seen and areas where the wildfires are orginating from. 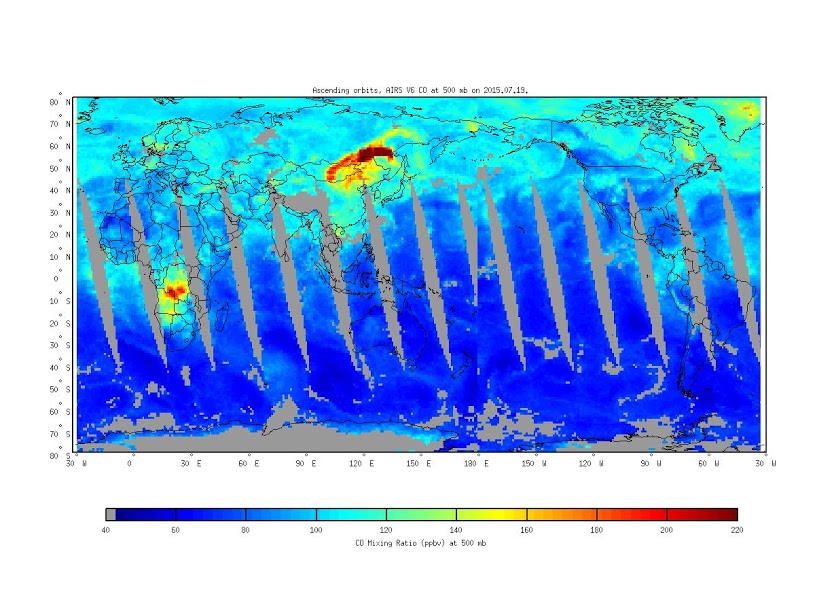 To further investigate the transport of smoke from this fire CALIPSO was used. This LIDAR shows the height of the clouds from the wildfire. The first image below is the 532nm Total Attenuated Backscatter plot on 19 July from 04:12 UTC to 04:25 UTC. The smoke from this fire can be seen extending from 53 N to 56 N  indicated by a light grey color, and increasing with height as the latitude increases. This plot shows that the smoke is moving northeast. The next image is the Depolarization image the smoke is indicated by a red/pink color. The third image is 1064 nm Total Attenuated Backscatter plot, the smoke on this plot is indicated by a light grey color. The fourth image is the Attenuated Ratio plot between 1064 nm and 532 nm. The smoke is indicated by the teal and purple pixels. The fifth image is the Vertical Feature Mask. This plot shows the different features that are in the atmosphere, the smoke is attributed as a cloud on this plot and is indicated by a light blue color. The last image shows the subtype of the aerosols that have been detected by the LIDAR. This shows that the aerosols that the LIDAR has detected are smoke (indicated by the black pixels) around 52 N and northeastward around 56 N. 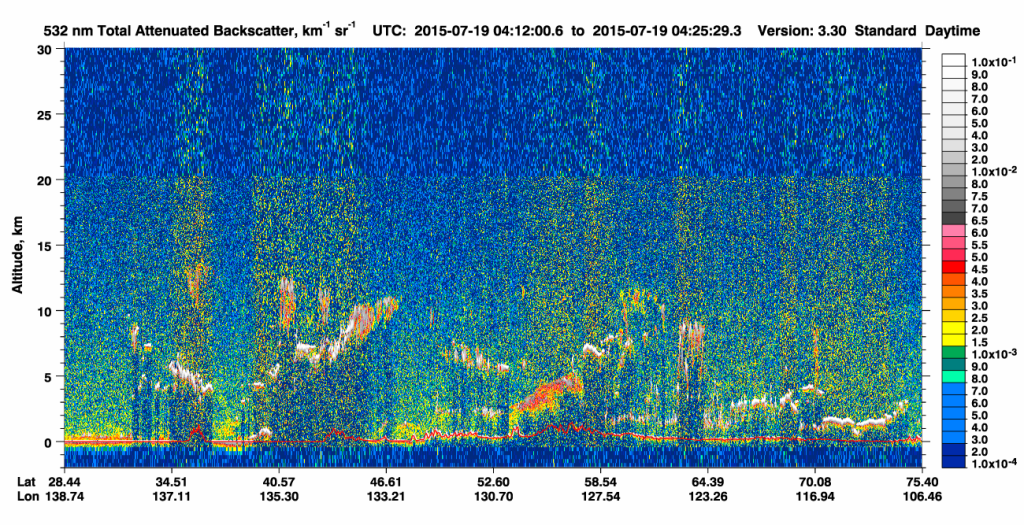 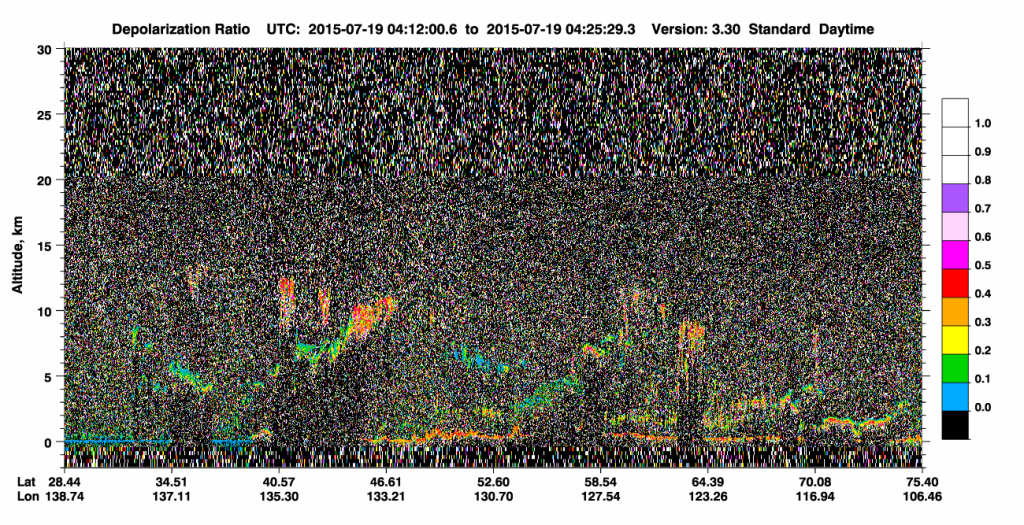 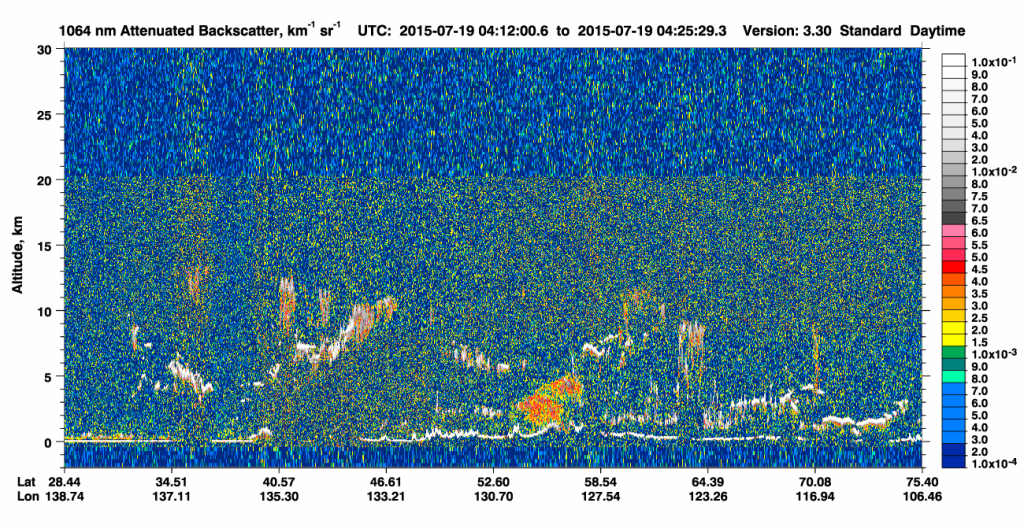 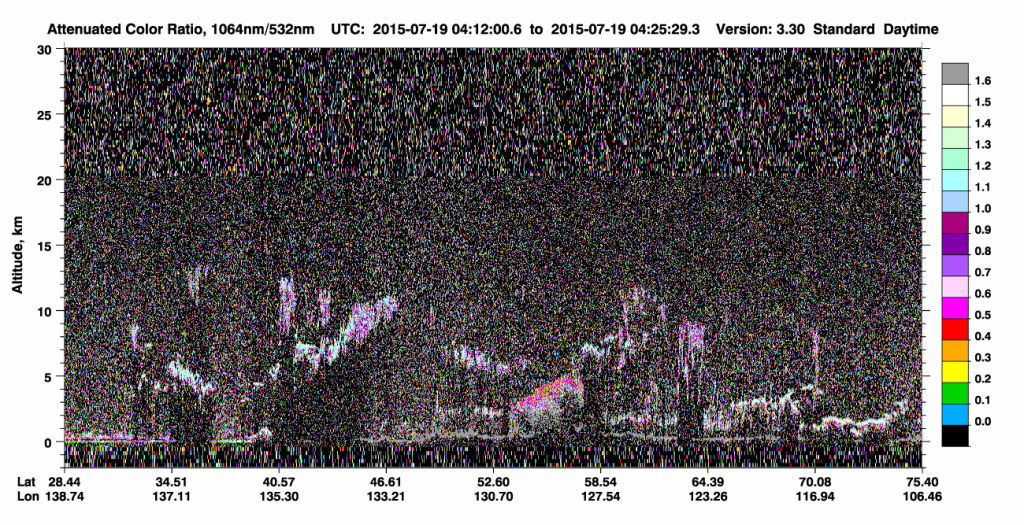 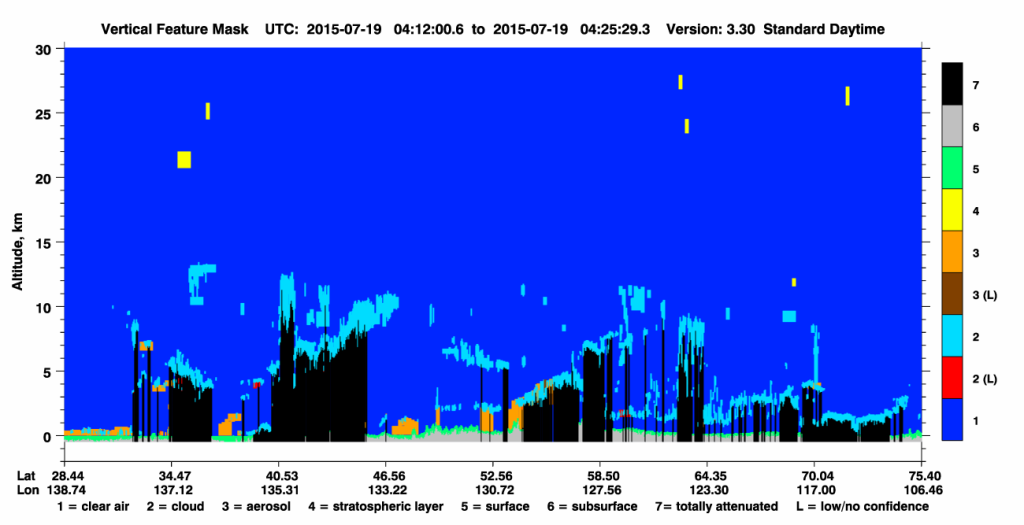