In Canada and Alaska, 2015 has been the year for wildfires. As of 08 July, the number of acres burned in Alaska has been the second highest in recorded history. In Canada the acres burned already exceeds the annual 10-year average for an entire year (image below). The government has deployed 1,000 military personnel to help fight wildfires in Saskatchewan (information and image provided by Wildfire Today). 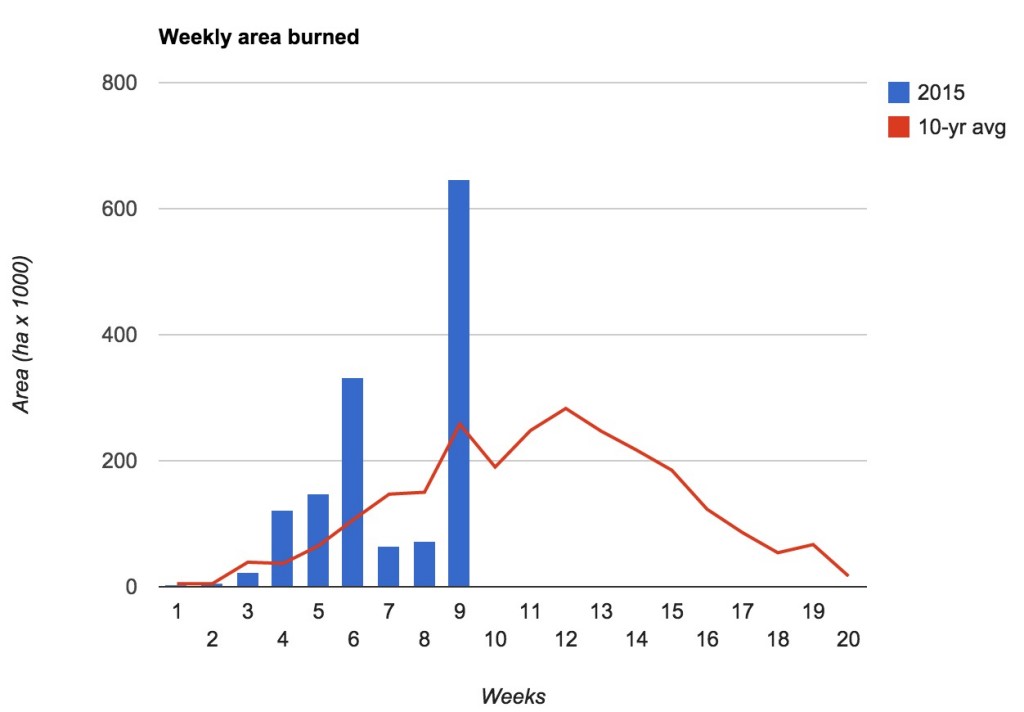 Canada are burned on a weekly basis through week of July 1, 2015 (click to enlarge) 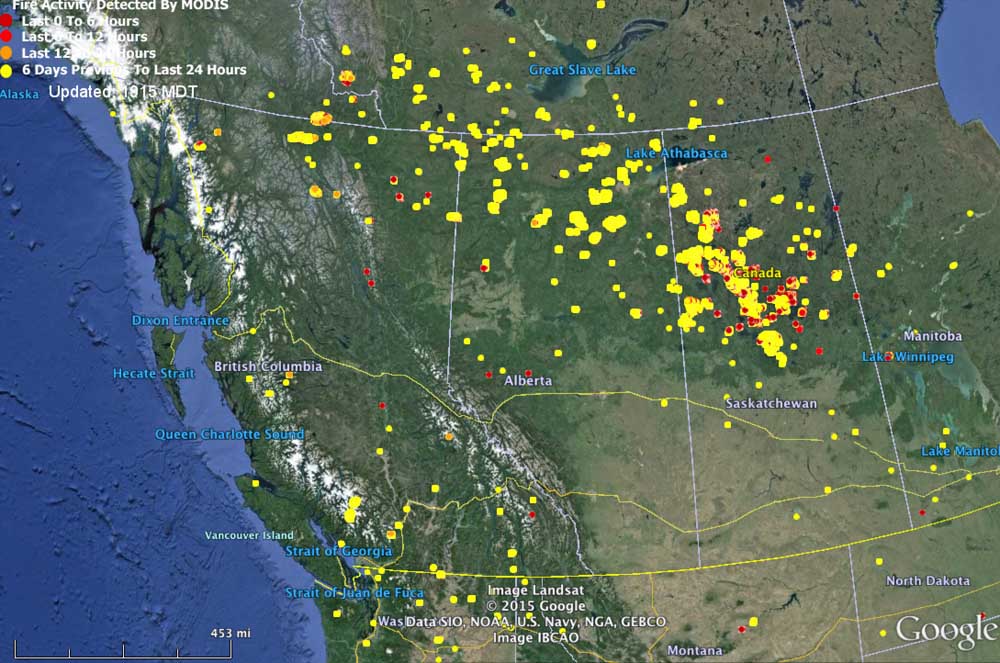 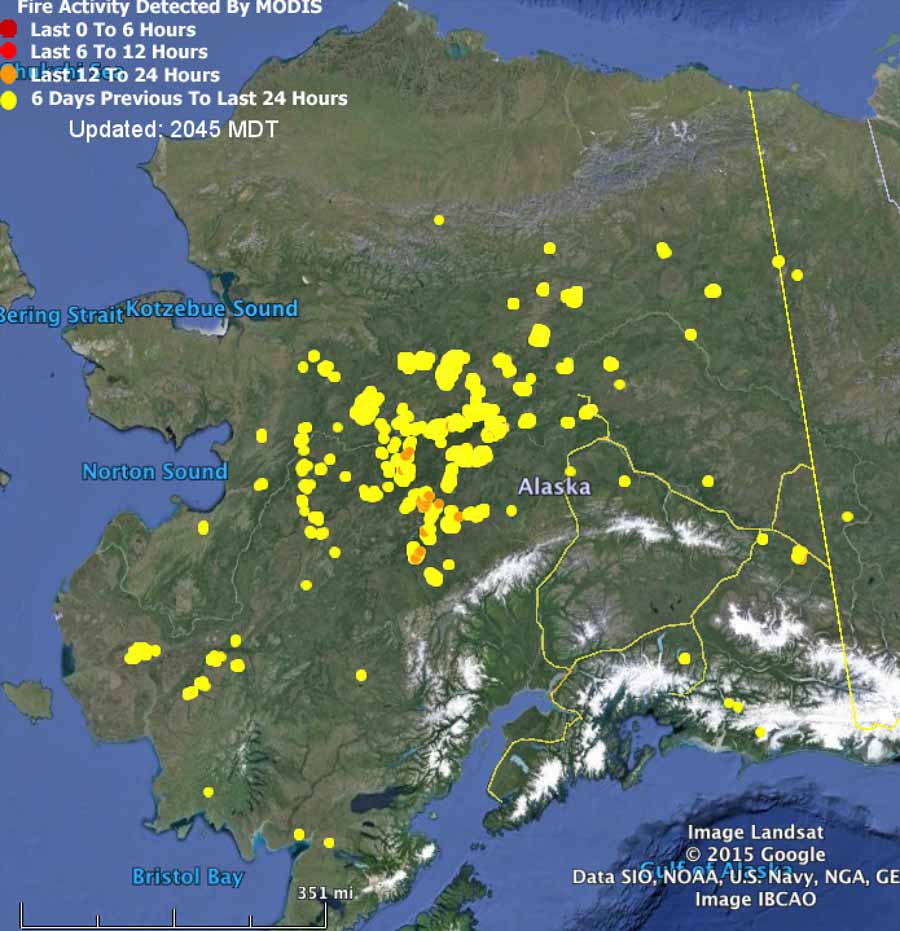 From these wildfires, massive amounts of smoke have been produced. This smokes has been covering parts of Canada and the United States for most of the summer. OMPS Aerosol Index (AI) helps show the transport of this smoke. Below is the image of the OMPS AI on 04 July (courtesy of Colin Seftor and information from Rene). On this image are three different areas with very high AI values. The first area is around the Great Lakes at 47.72 N 88.3 W with an AI value of 14.3 at 18:46 UTC. This cluster was produce by numerous fires in Saskatcehwan. This smoke could possibly be from the three pyroCbs that produced at 21:00 UTC on 03 July. Farther north the next area at 52.27 N 92.5 W had an AI value of 16.6 at 18:48 UTC. This cluster again is most likely from the pyroCbs in Saskatachewan. The last cluster to the west at 53.84 N 106.07 W produced an AI value of 11.1 at 18:48 UTC. This cluster came from the fires in northern Alberta. 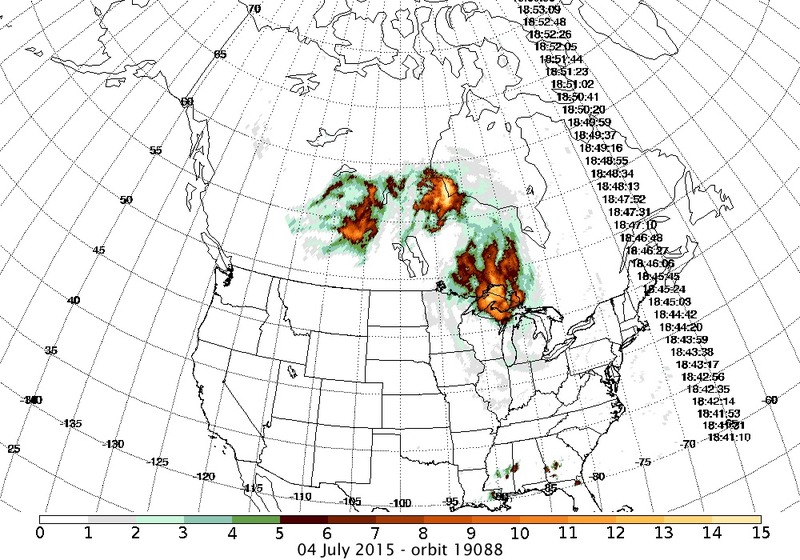 On 06 July the OMPS AI index image (courtesy of Colin Seftor) provides information about the smoke transport since 04 July. There are two areas of very high AI values. The first that covers part of Washington and Montana is from a fire in British Columbia that produced a pyroCb on 05 July. The other are of very high AI value is in the center of Canada. This value is from the multiple fires in Saskatchewan, some even producing pyroCbs. 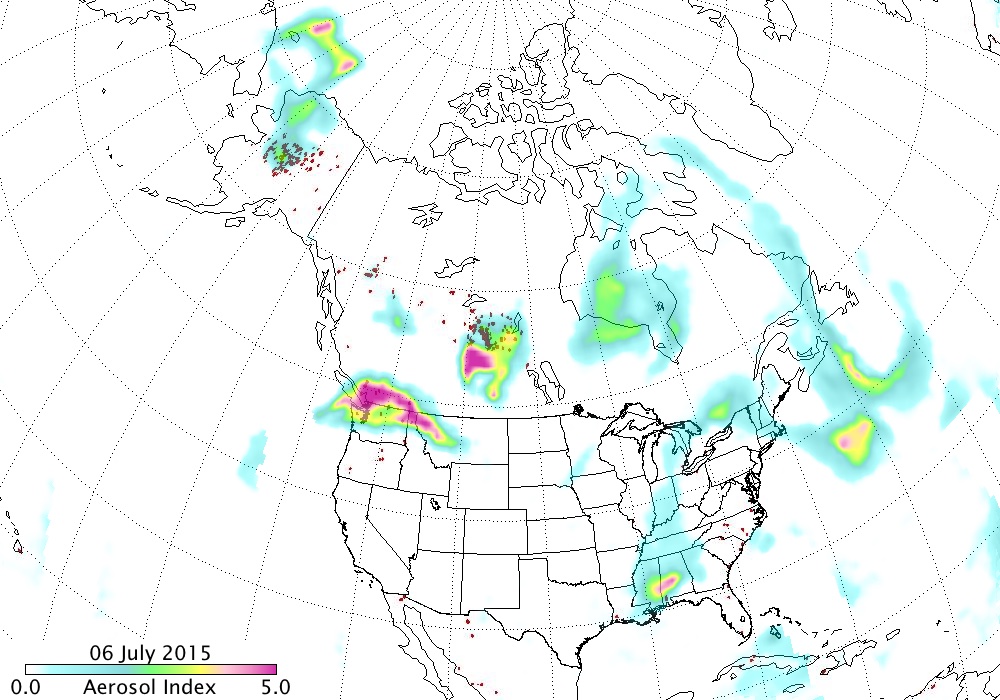 Furthermore, the northwestward drift of the smoke from Alaska can be seen using VIIRS visible imagery.

On 08 July the OMPS AI index image (courtesy of Colin Seftor) showed the AI index in the shape of a wishbone. These high values of AI came from fires in Alberta and Saskatchewan. Furthermore, Suomi NPP VIIRS true-color visible, shortwave IR, and IR images showed the smoke adding a  light brown hue to the convective clouds. This visible image correlates nicely with the high AI values shown in the first image. Also, the visible image shows smoke plumes originating form a cluster of hot spots just east of the Yukon/Northwest Territories.  In addition, from the IR image the coldest cloud-top brightness temperatures were between -59ºC to -60ºC. 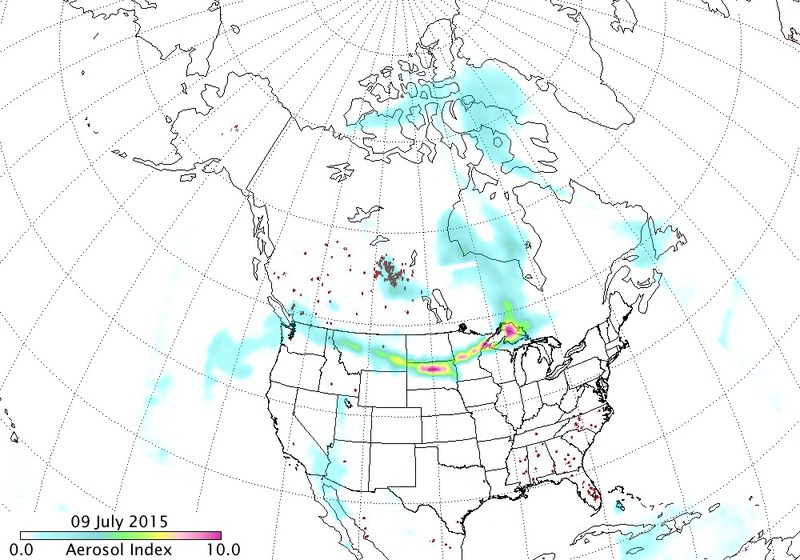 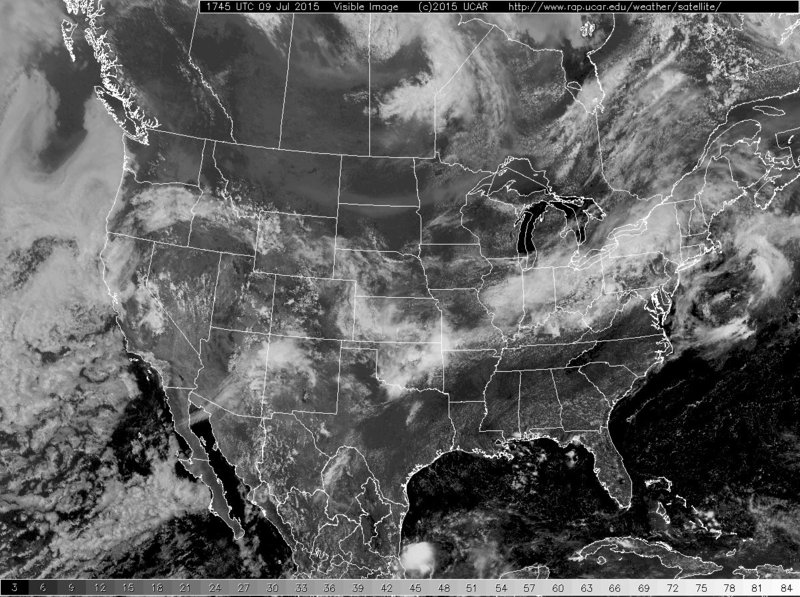 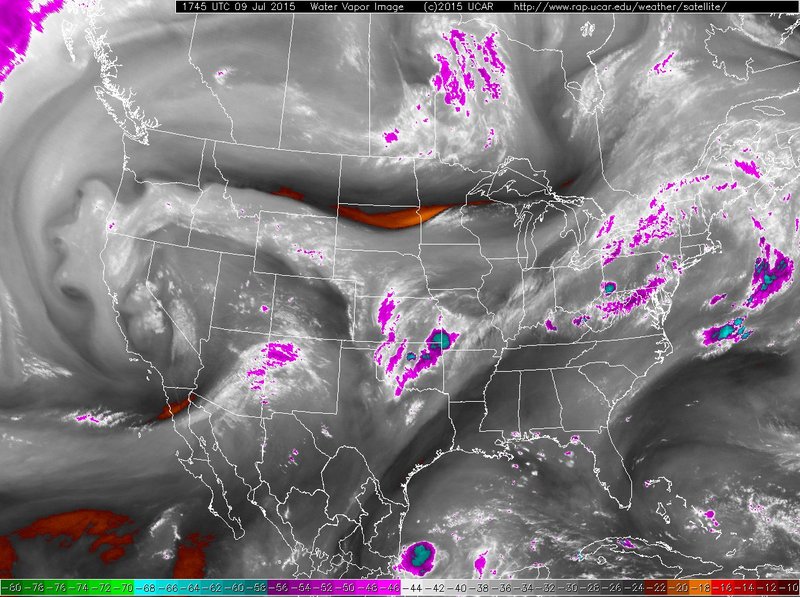 Furthermore, this air seems to be trapped with a ribbon of very dry air associated with lowering of the dynamic tropopause. The reason the tropopause is lowering is due to a potential vorticity anomaly moving eastward across Minnesota. Furthermore, with this smoke being trapped in dry air it is common for it to cause stratospheric intrusions. By looking at the Total Column Ozone (shown in the image below) there are higher values in the ribbon of dry air. This is conclusive with the hypothesis that there are some stratospheric intrusions within this ribbon of dry air. 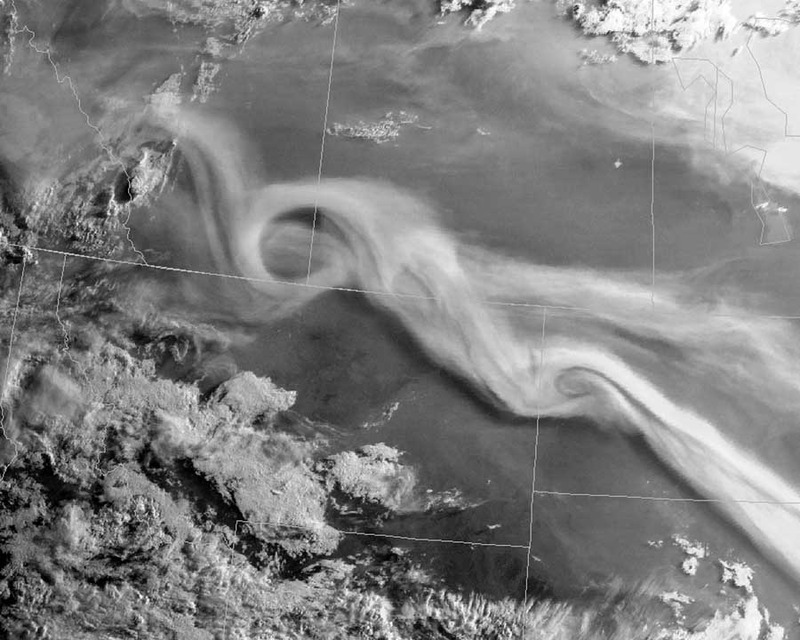 Visible image over Montana on 10 July (click to enlarge)

On 10 July the OMPS AI index image (courtesy of Colin Seftor) showed the smoke that was in the northern part of the United States on 09 July moving east and off to the eastern coast.