On 20 June according to the Alaska Interagency Coordination Center the Blair Fire started in the interior of Alaska (south of Fairbanks) at 64.3º N 147.3º W. On 24 June at 20:15 UTC a pyroCb formed from this fire. GOES-15 detected the smoke plume and pyroCb cloud, as well as the fire hot spot. Starting at 19:00 UTC on 24 June, the animation below shows visible (.63 μm) on the left and shortwave IR (3.9 μm) on the right (click image to play animation). In the shortwave IR images the darker black to red pixels indicate very hot IR brightness temperatures exhibited by the fire source region.

A timely overpass of the Suomi NPP satellite provided a good view of the pyroCb cloud very soon after its formation — a comparison of 20:18 UTC VIIRS 0.64 µm visible channel, 3.74 µm shortwave IR channel, and 11.45 µm IR channel images is shown below. On the visible image, the tall pyroCb cloud casts a shadow onto the dense layer of smoke below; the fire hot spot (black to yellow to red pixels) can be seen along the southeastern edge of the cloud; the minimum cloud-top IR brightness temperature was -56º C, which corresponded to an altitude of approximately 10.8 km (using data from the 00 UTC Fairbanks sounding). At the time of the VIIRS images, smoke was reducing the surface visibility at Fairbanks (PAFA) to 3/4 of a mile, and to the west-northwest at Tanana (PATA) the occasional fall of wildfire ash was being reported at the surface.

A sequence of daily Suomi NPP VIIRS true-color image composites from 18 June to 24 June (below) showed a dramatic increase in the areal coverage of dense wildfire smoke over Alaska during that period. A post on the Wildfire Today site mentioned the high number of lightning strikes that had occurred over the region in recent days, with a record  of over 14,000 lightning strikes in a single day on 21 June. A closer view of the 24 June VIIRS true-color image with an overlay of AVHRR-detected fire hot spots can be seen here. Due to the dense smoke , the Air Quality Index at Fairbanks on 24 June was 242 (on a scale of 0-500), placing it in the “Very Unhealthy” category.

Regarding the “smoke vortex” seen over northern Alaska on the 24 June VIIRS images above, GOES-15 0.63 µm visible channel images (below; click to play animation) showed the development and motion of this feature during the day. A pair of fires seemed to intensify in the southern foothills of the Brooks Range, north-northeast of Fort Yukon (PFYU), as the vortex passed — perhaps this was a boundary layer feature that helped to increase surface winds in its wake. 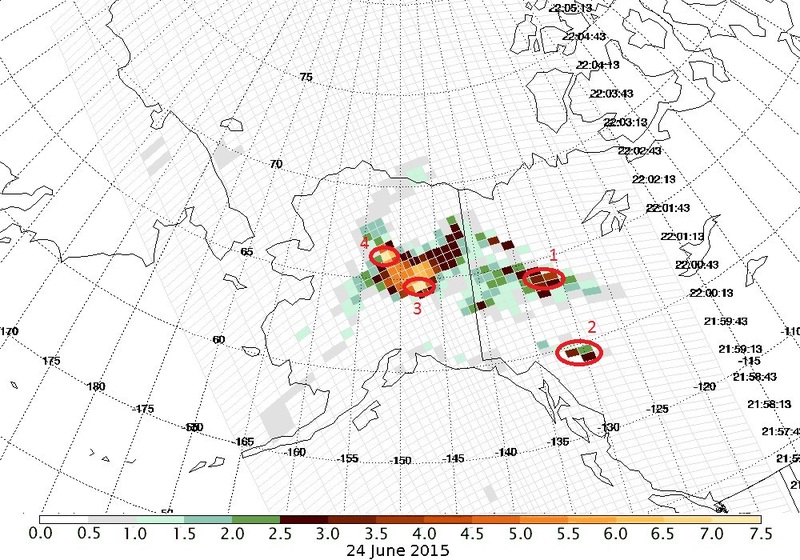