On 20 June 2015 there was a possibility that the Michigan Creek fire at 64.1º N 144.4º W  in southern Alaska produced a pyroCb; after further analysis it was determined that this fire did indeed produce a pyroCb. GOES-15 (GOES-West) detected the smoke plume and pyroCb cloud, but unfortunately it was too cloudy for the shortwave IR imagery to consistently detect the fire hotspots. Starting at 22:00 UTC on 20 June the animation below shows visible (.63 μm) on the left and shortwave IR (3.9 μm) on the right (click image to play animation).

In addition, using GOES-15 10.7 μm IR channel images the cloud-top IR brightness temperature can be found. The coldest brightness temperature of the pyroCb cloud was -60.1ºC around 01:00 UTC on 21 June. This is indicated in the animation by an orange color enhancement, and is seen moving southwest. Based on the Fairbanks and Whitehorse soundings the top of the cloud is therefore estimated to be around 11 km.

An overpass of the Suomi NPP satellite at 23:12 UTC on 20 June allowed a better view of the fire hot spot, along with the growing pyroCumulus cloud that was drifting northwestward away from the hot spot. A comparison of the VIIRS 3.74 µm shortwave IR, 11.45 µm IR, and 0.64 µm visible channel images (below) showed the Michigan Creek fire hotspot which was located about 30 miles northeast of Delta Junction / Ft. Greely (station identifier PABI); the young pyroCumulus cloud just to the northwest of the fire hot spot exhibited a minimum IR brightness temperature of -34º C (darker blue color enhancement).

On 21 June OMPS AI Index image were used again to see the transport of the smoke. From the AI image (below; image courtesy of Colin Seftor), the smoke is moving southeast. This is not consistent with the visible and IR images above. From that animation we saw that the smoke was moving southwest then west, indicating the max AI on this image isn’t from the smoke from this fire. However, there is a signature right above the coordinates for the fire around 63 N 144 W. 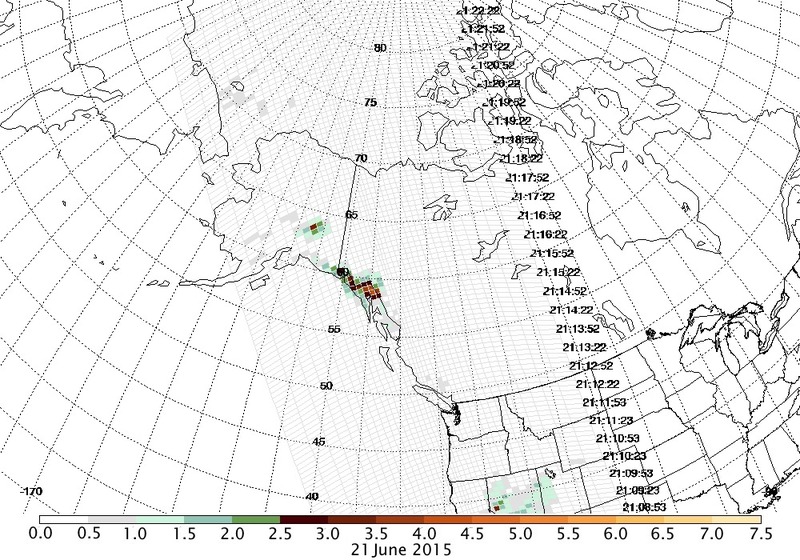