There have been a lot of fires within the past month in western and northwestern Canada. These fires have produced some pyroCbs that have been documented in this blog, but also these fires produce a lot of smoke. This smoke has been moving into the upper Midwest down to the East Coast from a northwest wind. The images below are from an article by Jon Erdman called “Smoke From Canadian Wildfires Drifted Over 1,600 Miles Into the U.S.” on weather.com. The first image is the satellite-derived analysis of smoke concentration on 10 June 2015. Heavier smoke is denoted by red contours, while lighter smoke is seen with green contours. The second images shows the visible satellite on 09 June along with a draw in jet stream to show the trajectory of the smoke. The last image is the same visible image from before, but has arrows denoting examples of smoke. There seems to be heavy smoke in areas under the jet stream. 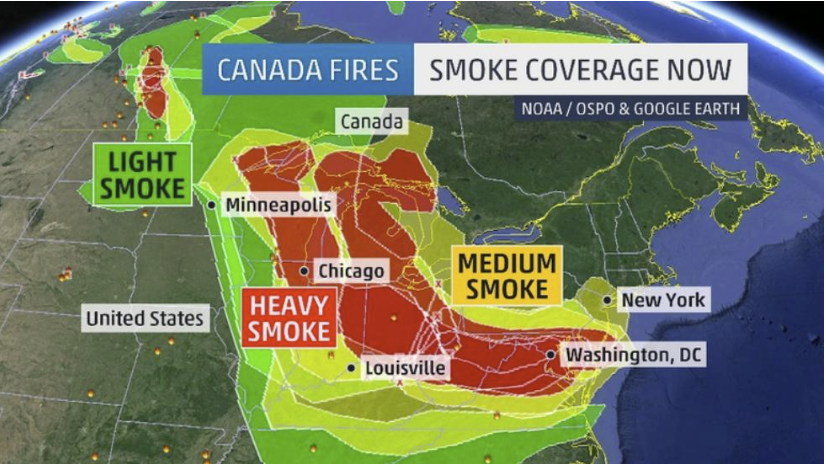 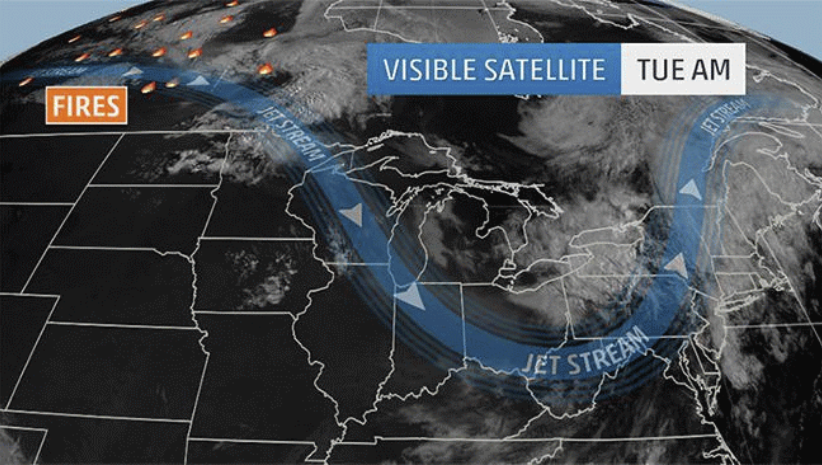 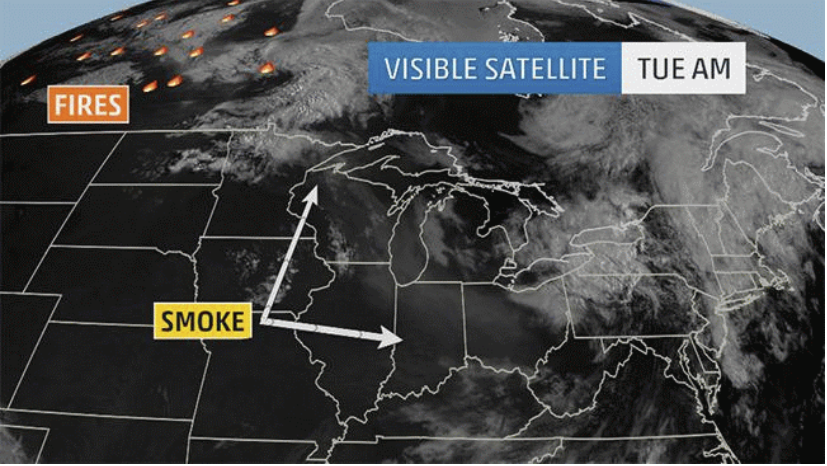 Furthermore using GOES Aerosol and SMOKE Product (GASP) image from 1215Z on 09 June (below; courtesy of Mark Ruminski). It shows that the smoke is so dense that the system’s algorithm thinks it is a cloud. The dense smoke is seen in portions of Wisconsin and Indiana indicated with a red color. 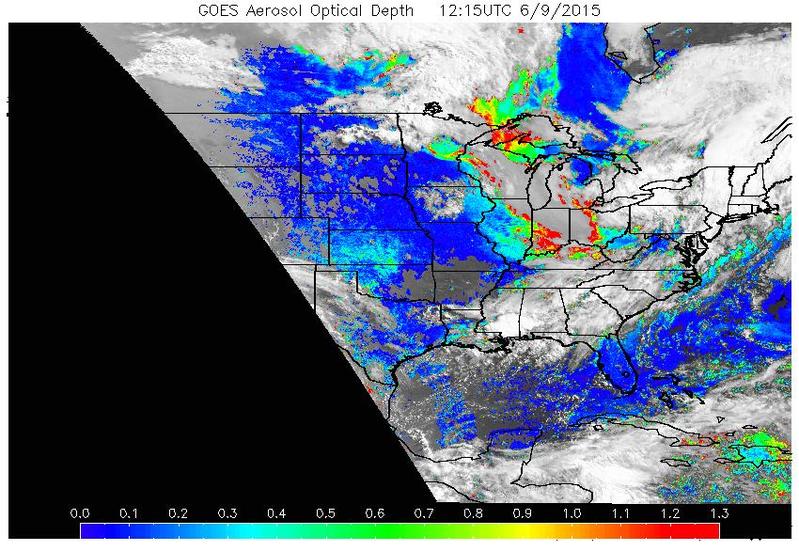 Smoke transport from the fires in Canada can be followed using the OMPS Aerosol Index (AI) product. The following images are comparisons of AI images from consecutive satellite overpasses on 09 June (below; image courtesy of Colin Seftor). From the image it is apparent that the smoke is moving into Indiana, Ohio, and West Virginia. Below this image is the visible animation start at 17:00 UTC for this same area. It shows the smoke is moving southeast and will be in the east coast by 10 June. In addition, using Sumoi NPP True Color the smoke is visible above these states indicated with a light grey color. 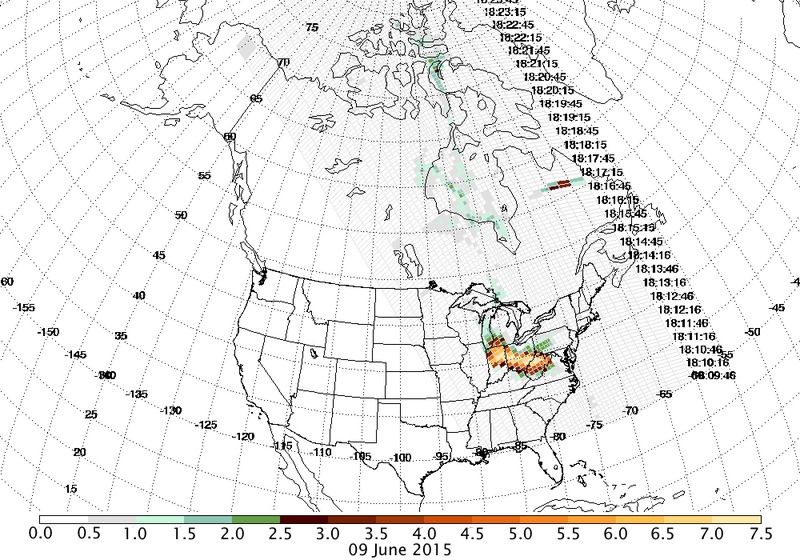 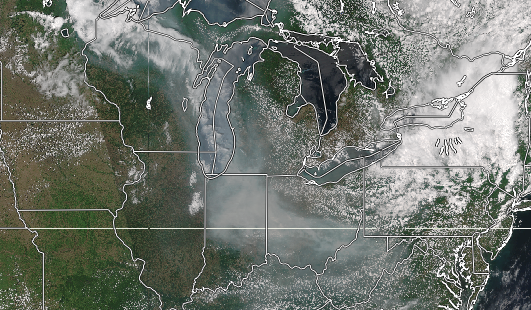 On 10 June OMPS AI Index images were used again to see the transport of the smoke. From the AI image (below; image courtesy of Colin Seftor), the smoke is now seen on the east coast in states like Virginia and Maryland. Furthermore, the smoke can be seen using GOES-13 visible imagery starting at 16:00 UTC (below). Furthermore, Suomi NPP True Color captured the smoke on the east coast. It is shown on the image as a grey color. Also, the last image below shows the satellite smoke plumes and their densities. There is obviously a smoke plume shown in the image and the red color indicates a very high density. This means that the smoke that is on the east coast is very thick. 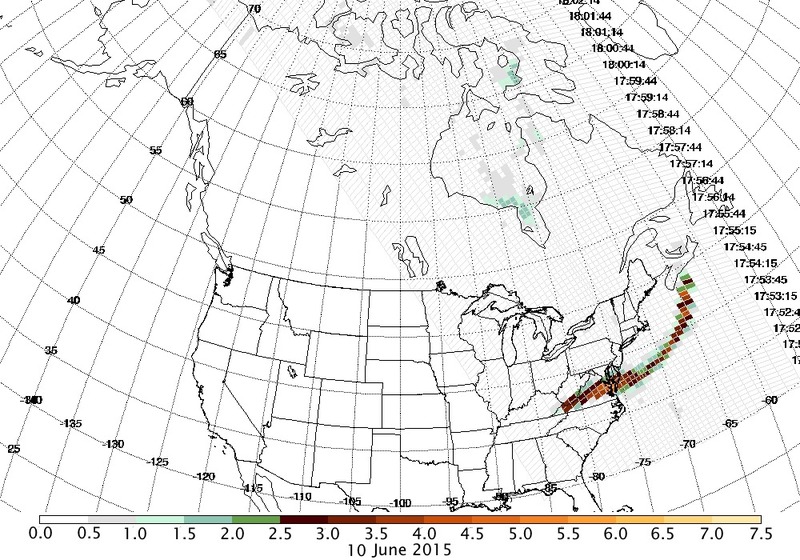 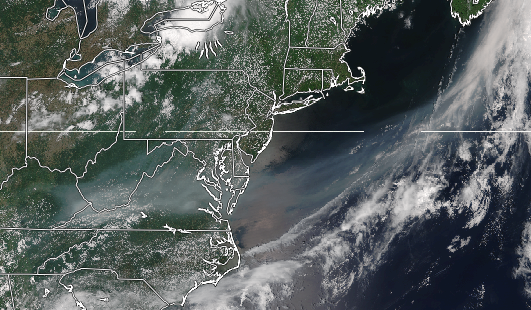 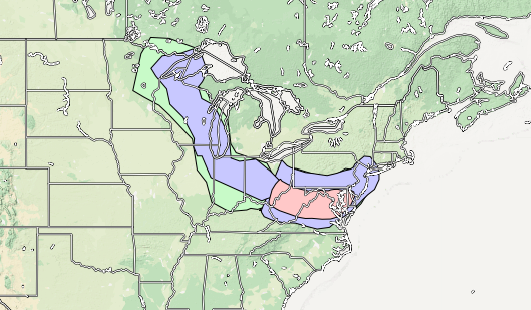