The first unambiguous pyroCb event of the 2014 Northern Hemisphere wildfire season occurred in the Irkutsk region of Siberia, Russia on 18 May 2014. Korean COMS-1 satellite 0.675 µm visible channel images (above; click image to play animation; also available as an MP4 movie file) showed an increasing amount of smoke output from numerous fires burning northwest of Lake Baikal; toward the end of the day, a strong cold front moving eastward across the region appeared to be the catalyst for producing a pair of pyroCb events in the vicinity of Bratsk (station identifier UIBB).

A time series of surface weather for Bratsk (below) showed that smoke had been reducing surface visibility to 3-4 miles during the overnight and early morning hours, but the visibility then dropped to 1.9 miles as south-southeasterly winds began to increase ahead of the arrival of the cold front. Once the cold front passed, the surface air temperature dropped from 73ºF (22.8ºC) at 08 UTC to 43ºF (6.1ºC) at 13 UTC, as westerly winds gusted as high as 33 knots.

The  corresponding COMS-1 10.8 µm IR channel images (below; click image to play animation; also available as an MP4 movie file) indicated that for the second, more explosive pyroCb northeast of Bratsk the cloud-top IR brightness temperature crossed the -40ºC threshold at 10:45 UTC, and then became colder than -50ºC at 11:00 UTC (IR/visible image comparison). The coldest cloud-top IR brightness temperature was -57.8 at 13:15 UTC.

Looking at the 12 UTC rawinsonde data from Bratsk (below), the -57.8ºC cloud-top IR brightness temperature roughly corresponded to an altitude of 10.2-10.7 km.

Multi-angle Imaging SpectroRadiometer (MISR) smoke plume heights (below) confirmed that the maximum height of the smoke plume was in the 11-12 km range. 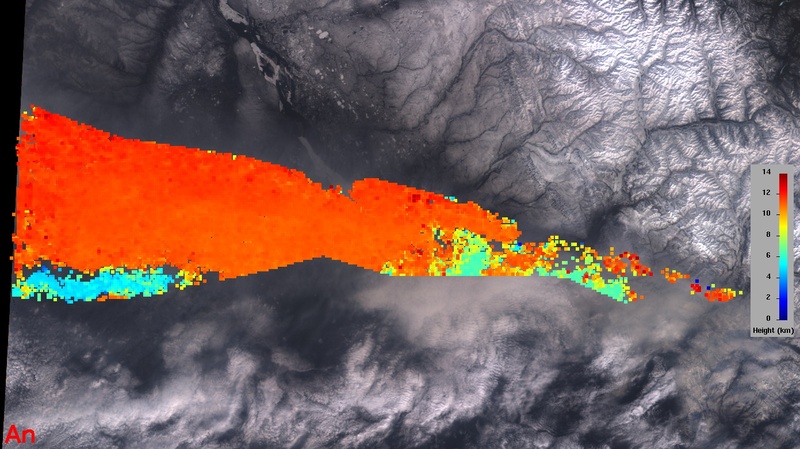 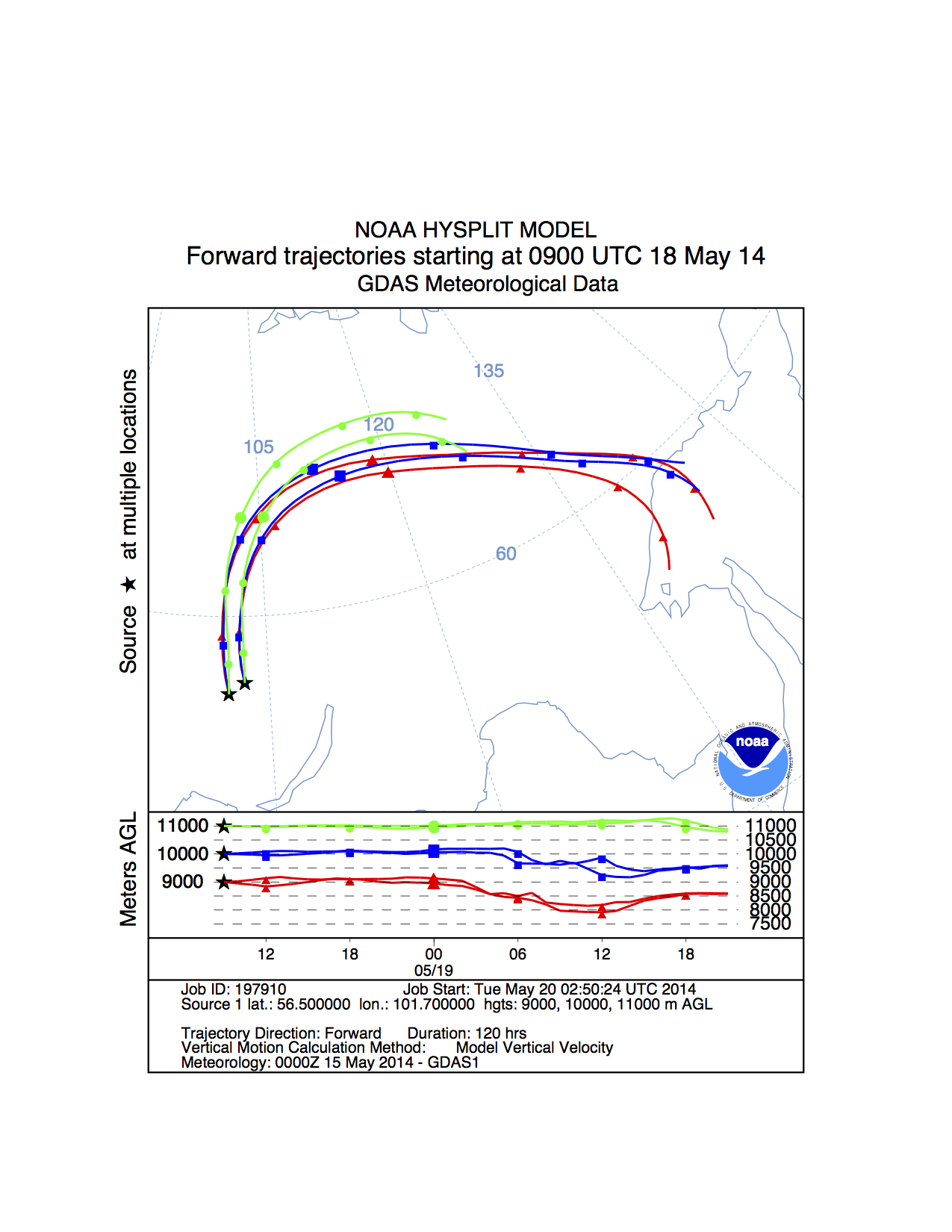 The anticyclonic transport of smoke was confirmed by images of Suomi NPP OMPS Aerosol Index on 19 and 20 May (below; courtesy of Colin Seftor).

A similar anticyclonically-curved signal of smoke aloft was seen on the AIRS Carbon Monoxide mixing ratio product from 18 May (below). 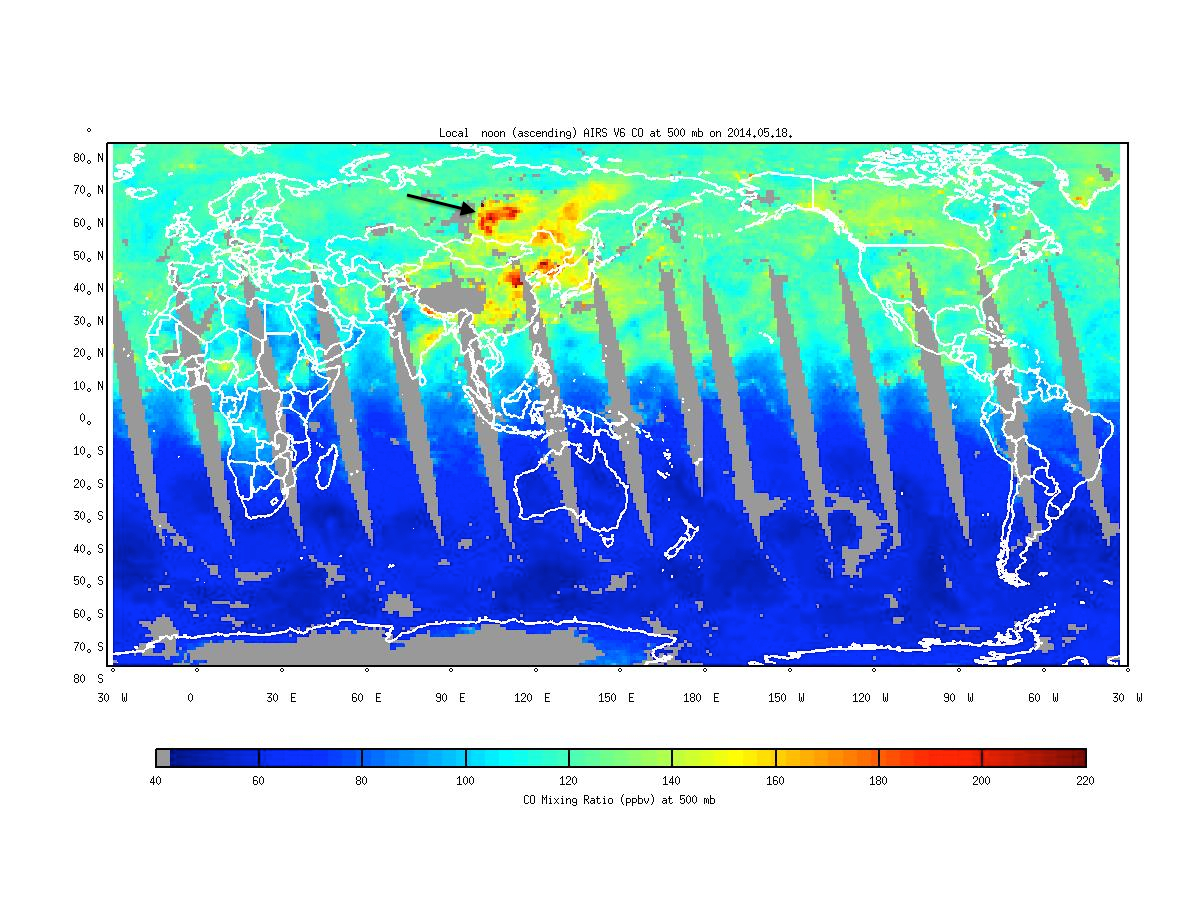