On 17 November there was a possibility for more pyroconvection. According to ABC News four people have died from the fire activity in region. Furthermore Rick McRae has reported that 80% of the main fire was in the wheatbelt area. This area has been known the produce pyroCbs. Furthermore, weather conditions were astounding with winds gusting at 09:46 UTC between 50 and 74 km/kr. At 06:40 UTC the temperature was 41.2°C with 2% relative humidity and a sea level pressure of 997 hPa. McRae attributes the lack of pyroCb formation to the gusting winds and not enough buoyancy to provide upward vertical motion. The following Skew-T provided by Rick McRae taken at Esperance shows the upper air conditions around these fires and the increase in dew point to 34°C. 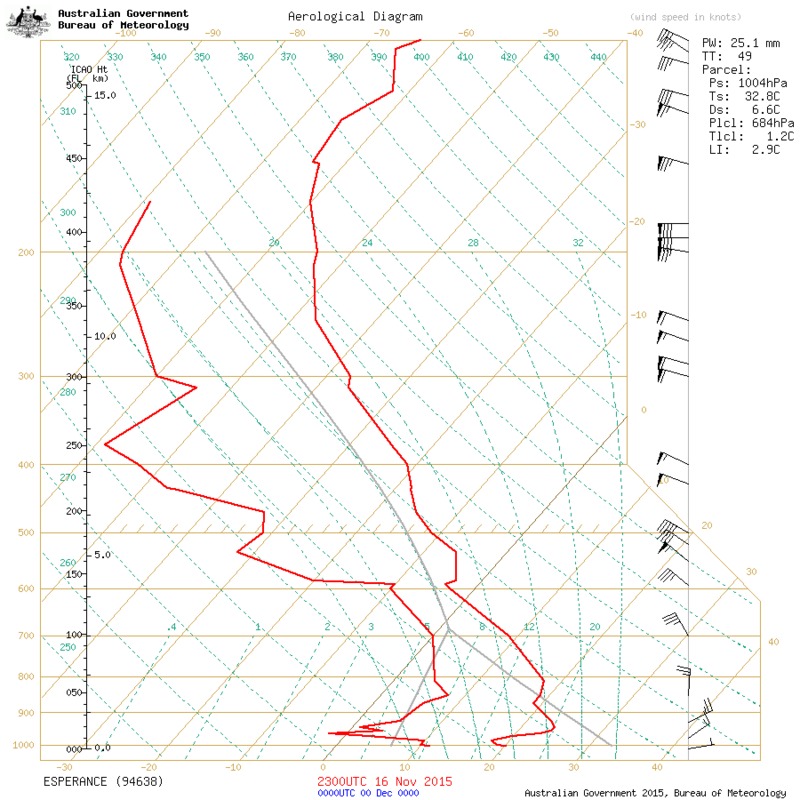 Himawari-8 detected the smoke plume and clouds around the fires, as well as the fire hot spots. Starting at 05:00 UTC on 17 November, the animation below shows visible (.64 μm) on the left and shortwave IR (3.9 μm) on the right (click image to play animation). In the shortwave IR images the darker black to red pixels indicate very hot IR brightness temperatures exhibited by the fire source region.

To further investigate the transport of smoke from this fire CALIPSO was used. This LIDAR shows the height of the clouds from the wildfire. The first image below is the 532nm Total Attenuated Backscatter plot on 17 November from 16:07 UTC to 16:30 UTC. The smoke from this fires can be seen ~ 35-40 S indicated faintly by a red/grey color.  The second image is 1064 nm Total Attenuated Backscatter plot, the smoke on this plot is indicated by a grey color. The third image is the Depolarization image the smoke is indicated by a light blue color. The fourth image is the Attenuated Ratio plot between 1064 nm and 532 nm. The smoke is indicated by the grey pixels. The fifth image is the Vertical Feature Mask. This plot shows the different features that are in the atmosphere, the smoke is attributed as a cloud on this plot and is indicated by a light blue color. The last image shows the subtype of the aerosols that have been detected by the LIDAR. This shows that the aerosols that the LIDAR has detected are smoke (indicated by the black pixels).