The “Hardluck Fire” located in the Shoshone National Forest in far northwestern Wyoming (InciWeb | Wildfire Today) — which was thought to have been started by lightning on 17 July 2013 — experienced a large flare-up (growing 3350 acres, for a total of 4580 acres burned) during the afternoon hours on 26 July 2013 which led to the formation of a well-defined pyroCumulonimbus (pyroCb) cloud. A comparison of 1-km resolution GOES-13 (GOES-East) 0.63 µm visible channel and 4-km resolution 3.9 µm shortwave IR channel images (above; click image to play animation; also available as an MP4 movie file) showed the active fire “hot spot” (red-enhanced shortwave IR pixels) and the eventual development of a large smoke plume and pyroCb cloud on the visible imagery.

The corresponding 4-km resolution GOES-13 10.7 µm longwave IR images (below; click image to play animation; also available as an MP4 movie file) revealed that the pyroCb cloud top began to exhibit IR brightness temperature values colder than -30º C (cyan color enhancement) at 21:15 UTC, -40º C (green color enhancement) at 22:02 UTC, and a minimum value of -47º C (light yellow color enhancement) at 23:32 and 23:45 UTC as the pyroCb anvil drifted southeastward across Wyoming. The leading edge of the cold pyroCb cloud mass was located over the Wyoming/Nebraska border by the end of the animation at 02:15 UTC on 17 July.

A comparison of 1-km resolution NOAA-15 AVHRR 0.63 µm visible channel, 3.74 µm shortwave IR channel, 10.8 µm longwave IR channel, and false-color Red/Green/Blue (RGB) images (below; images courtesy of Rene’ Servranckx, CMC) provided a closer view of the fire source region and the pyroCb cloud at 00:27 UTC on 27 July. The coldest cloud-top IR brightness temperature was -49.5 º C (within the green color-enhanced area), 2.5º C colder than what was seen less than an hour earlier on the GOES-13 IR images.

The southeastward-drifting pyroCb anvil was in the general vicinity of the Riverton, Wyoming upper air sounding site around 00 UTC on 27 July — a plot of the rawinsonde data for that time indicated that the -47º C temperature of the coldest GOES-13 IR pixel was located around the 235 hPa or 11.3 km level (where the wind was from the west-northwest at 71 knots). The tropopause appeared to be near the 124 hPa or 16 km level (where the minimum air temperature was -63.7º C).

HYSPLIT model 72-hour forward trajectories initiated at the location of the fire source point (below) showed a southeastward transport starting at the 11 km (coldest GOES-13 IR pixel height) and 13.5 km altitudes; at the 16 km height of the tropopause, the model indicated very little transport away from the fire source region. 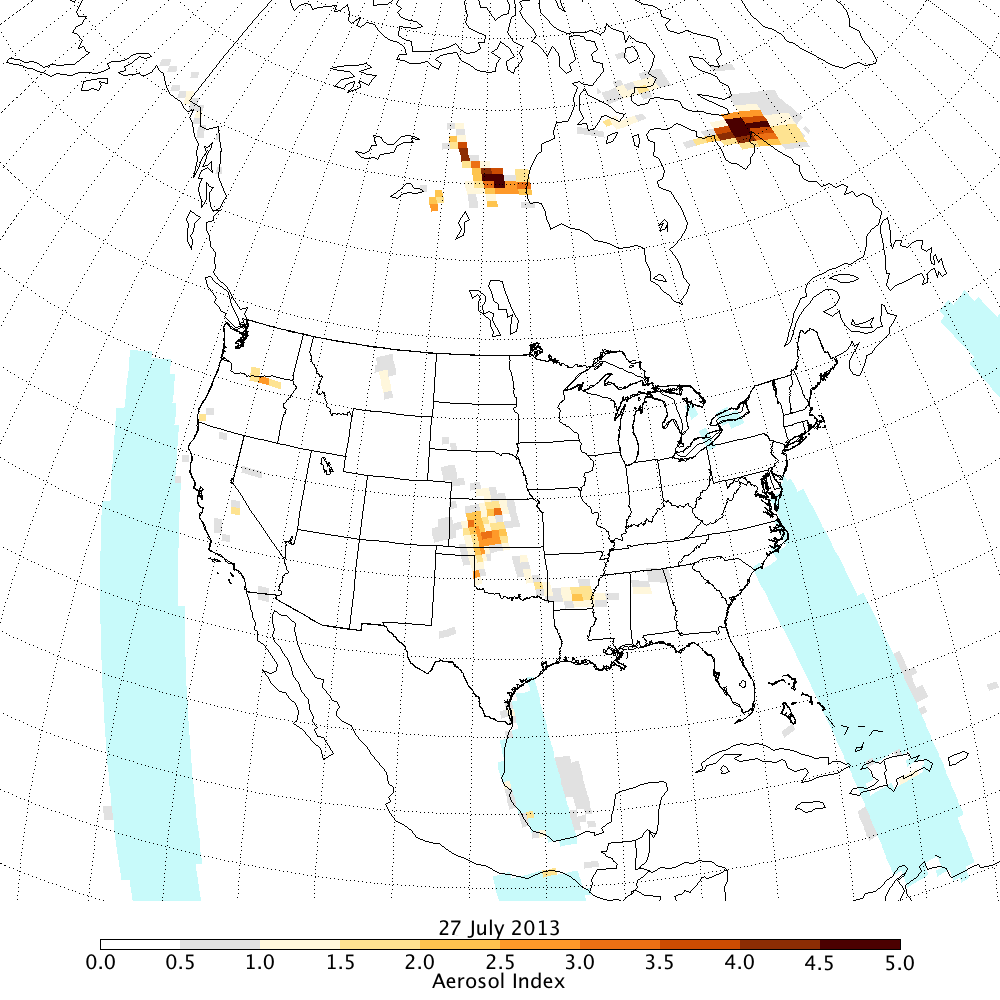 On the following day (27 July), the Aerosol Index (AI) from the Ozone Mapping Profiler Suite (OMPS) instrument on the Suomi NPP satellite (above; courtesy of Colin Seftor) showed an area of elevated AI (as high as 3.2, darker orange color enhancement) centered over Kansas. This is consistent with smoke transport associated with the general northwesterly flow aloft over the central US on 26 July, between a ridge of high pressure over the Southwest US and a trough of low pressure over the western Great Lakes region (below), and was also in good agreement with the initial 18-24 hour HYSPLIT model forward trajectory transport paths at the 11 and 13.5 km altitudes.

Note that the leading edge of the 27 July OMPS Aerosol Index plume was arcing eastward over northern Alabama, in agreement with the 11 km HYSPLIT trajectory. The University of Wisconsin Lidar Group was operating their ground-based High Spectral Resolution Lidar (HSRL) at Huntsville, Alabama at that time, which detected an unambiguous signature of smoke at altitudes as high as 12 km late in the day on 27 July; subsequent lidar data indicated that the smoke layers then subsided into the middle troposphere during the overnight and early morning hours on 28 July (below). 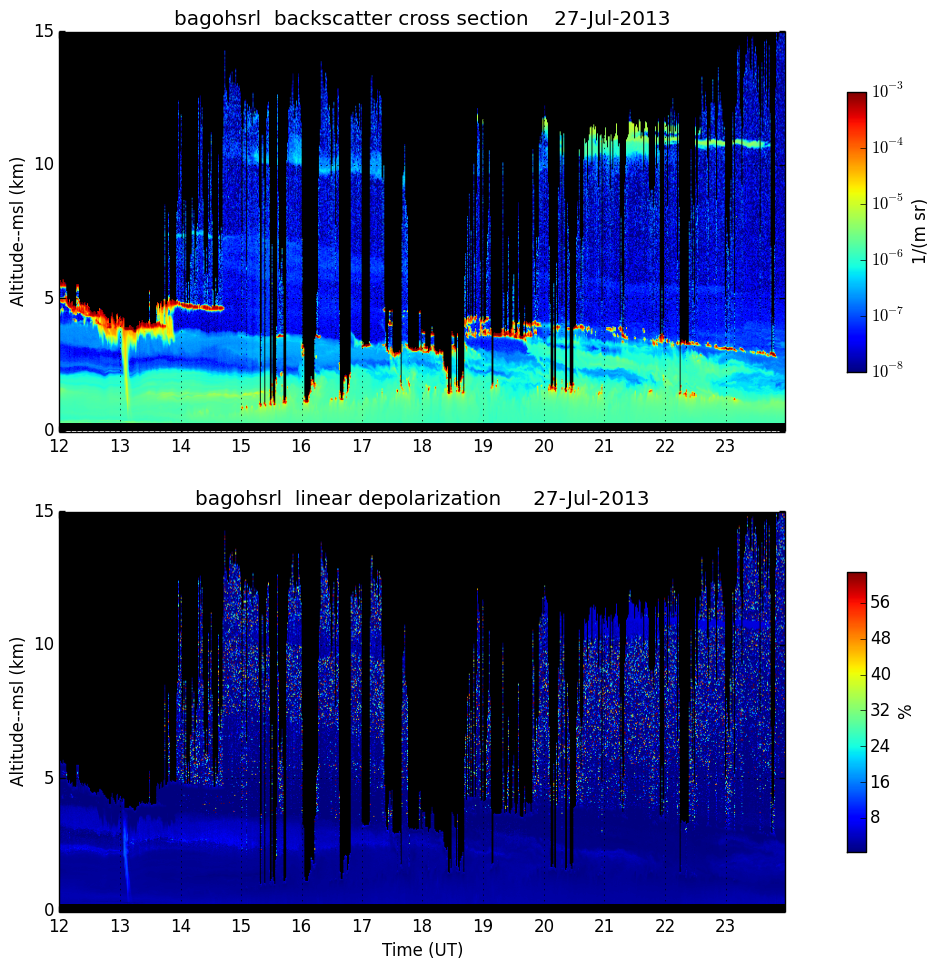 HRSL backscatter and depolarization over Huntsville, Alabama on 27 July 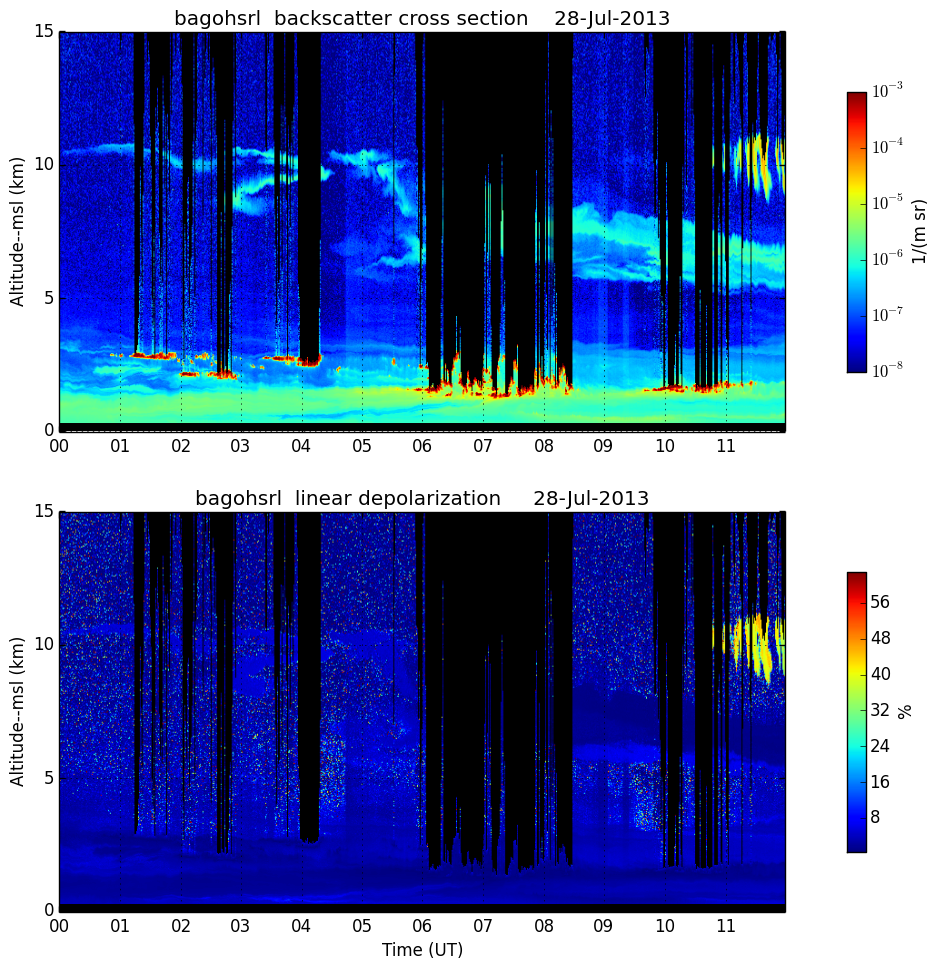 HRSL backscatter and depolarization over Huntsville, Alabama on 28 July

On 28 July, just after 07 UTC, the CALIPSO satellite made an orbital pass over eastern Canada (map) — the CALIOP lidar data (below) revealed the presence of a thin layer of smoke just above the cloud top (at an altitude of about 12 km), and HYSPLIT backward trajectories suggested that this smoke originated from the region of the 26 July Hardluck Fire pyroCb. The lidar total attenuated backscatter indicated a strong, young plume; the depolarization was fairly homogeneous at values less than 20%; the 1064/532 nm color ratio was distinct from the neighboring cirrus, and indicative of relatively small particles.