The Carpenter 1 Fire (InciWeb) was started by lightning in the Spring Mountains west of Las Vegas, Nevada on 01 July 2013. Three days later, on 04 July 2013, a comparison of GOES-15 (GOES-West) 0.63 µm visible channel and 3.9 µm shortwave IR images (above; click to play animation) showed the development of a large pyrocumulonimbus (pyroCb) cloud on the visible imagery, along with a distinct fire “hot spot” (cluster of red pixels) on the shortwave IR imagery (early in the animation, the dry and sandy desert land surfaces also appeared very hot during the afternoon hours and thus exhibited red-enhanced pixels).

The corresponding GOES-15 10.7 µm IR channel images (below; click to play animation) showed the very rapid spread in areal coverage of the pyroCb cloud top, which exhibited IR brightness temperatures as cold as -67º C. Also note the appearance of a fire “hot spot” (darker black pixels on this color enhancement), which is unusual to see on longwave IR imagery (unless the fire is extraordinarily hot).

According to the 07 July 00 UTC rawinsonde data from nearby Las Vegas, Nevada (below), the altitude of the -67º C air temperature was near 14 km; the tropopause was slightly higher in the atmosphere (around 15 km), with an air temperature of -69º C.

HYSPLIT model 72-hour forward trajectories (below) suggested an initial northeastward transport of smoke aloft during the following 24-36 hours, followed by an anticyclonic transport curving toward the south over the central US. 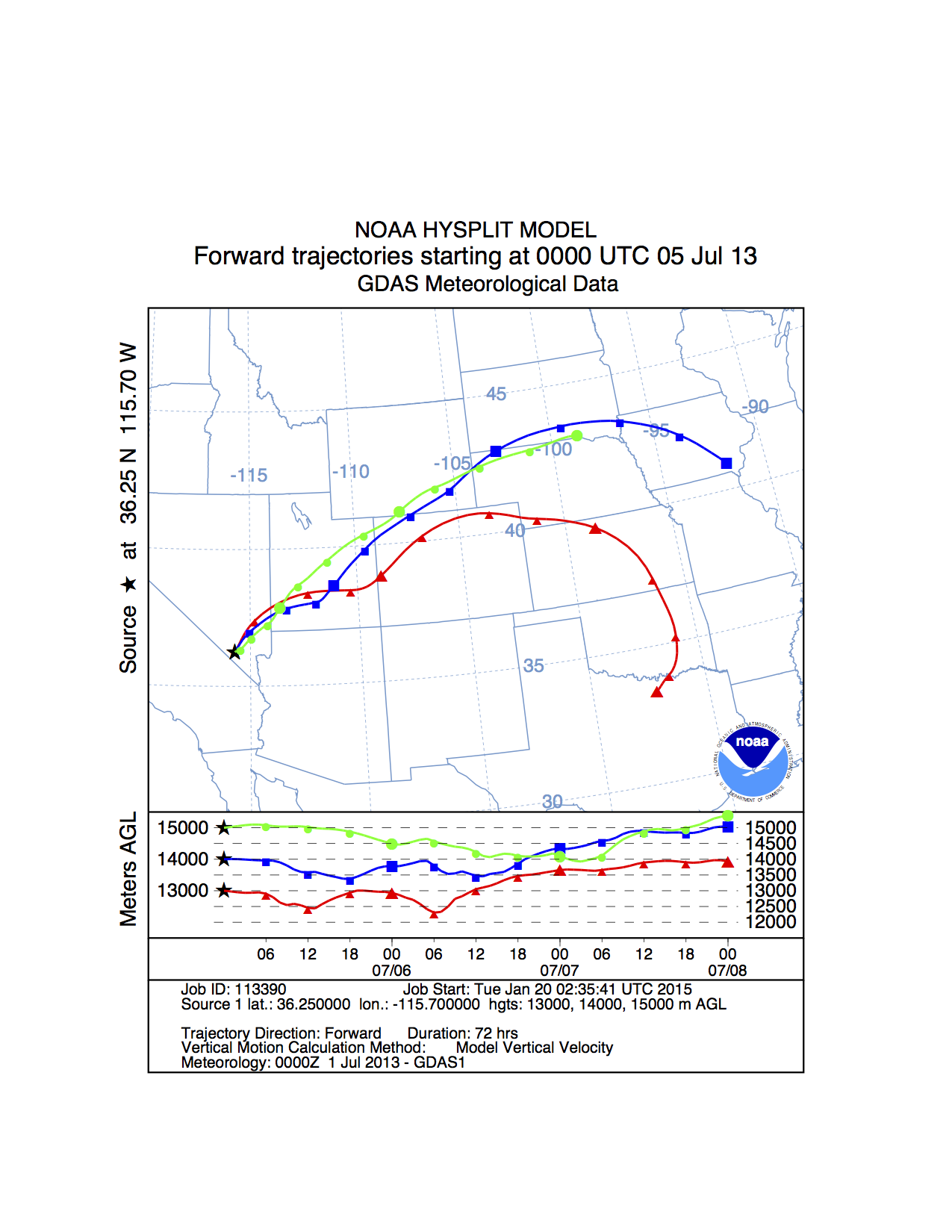 An obvious increase in the size of the night-time fire hot spot (black to yellow to red color enhancement) is seen in a comparison of Suomi NPP VIIRS 3.74 µm shortwave IR images just after 10 UTC (3 AM local time) on 04 July and 05 July (below).

The Carpenter 1 fire continued to burn into 06 July. A nighttime comparison of a 4-km resolution GOES-15 3.9 µm image with the corresponding 375-m resolution (mapped onto a 1-km AWIPS grid)  Suomi NPP VIIRS 3.74 µm shortwave IR image around 09:40 UTC or 2:40 AM local time (below) demonstrated the advantage of higher spatial resolution for the task of accurately identifying the location of the active fire hot spots (black to yellow to red color-enhanced pixels).