On 22 August there was a pyroCb in Russia. This pyroCb formed at 52.7 N 108 E at 05:00 UTC. Himawari-8 detected the smoke plume and clouds around the fires, as well as the fire hot spots. Starting at 04:30 UTC on August 22, the animation below shows visible (.64 μm) on the left and shortwave IR (3.9 μm) on the right (click image to play animation). In the shortwave IR images the darker black to red pixels indicate very hot IR brightness temperatures exhibited by the fire source region.

In addition, using Himawari-8 10.4 μm IR channel imagery the minimum cloud-top IR brightness temperatures could be found. The animation below, starting at 04:30 UTC on 22 August, shows that the pyroCb reached around -56 ºC (orange color enhancement) at 8:10 UTC.

Below is an animation of the convergence at 250 mb shown by a color fill, the the 250 mb geopotential height contoured every 30 meters and the wind barbs. It has been investigated that upper level divergence is associated with the ability for pyroCu to turn into a pyroCb (Peterson et al., BAMS, Feb. 2015, 229-247). Starting at 0 UTC on 22 August the spot of the pyroCb is indicated by a white dot. This pyroCb is in an area of divergence. This is conducive to the strengthening of the pyroCb. If there is divergence at upper levels there is rising air below that area of divergence. These conditions are favorable to the pyroCb developing.

This Skew-T taken at 6 UTC on 22 August after the pyroCb formed shows a very dry layer around 500 mb. From the Skew-T it is apparent that there is a lot of CAPE which is favorable for convective development. This will help turn pyroconvection into a pyroCb. Furthermore, from the Skew-T the winds are veering indicating a cyclonic motion. 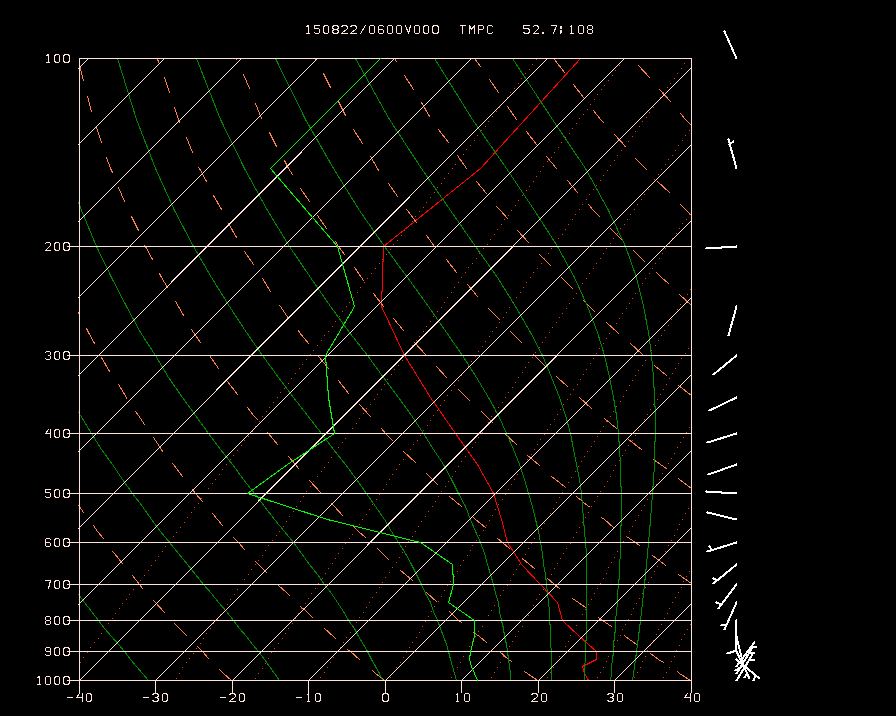 Skew-T at 6 UTC (click to enlarge) Green line is dew point and red line is temperature.